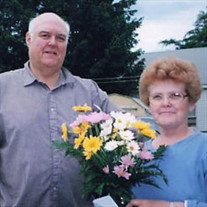 Westbrook – Judith Danis, 81, of Westbrook, ME passed away at home, Tuesday November 30, 2021 surrounded by family. She came into the world on June 22, 1940 to Elroy and Evelyn Sawyer. Going to school and growing up in Portland, her grandmother, Grace played a very large part in raising her and her siblings. After a long and often difficult life she created a family of 5 and quite often welcomed many into her life, also collecting a large group of friends along the way until recently. Mom greatly enjoyed the company of the Golden Club a group of retired folks from Brighton Medical Center, her favorite group of friends other than family. Her five children would go on to create a large extended family giving her Grandchildren, Great Grandchildren, and Great-Great Grandchildren. Finally settling with the love of her life, Robert Danis of Westbrook after 35 years of happiness and joy. They enjoyed adventures and road trips just for fun and thus created another part of our family circle. Sadly, Robert passed away on May 24, 2019. Mom continued and due to circumstances beyond her control was unable to go to her social events and as the rest of us became much more of a home body. She was comforted and surrounded by loving family. Her journey was made as joy full and comfortable as possible, making her passing more personal and family oriented with much respect. She was pre deceased by her grandparents, parents, her brothers Joe and David. She leaves behind her five children, son John; daughters Marjorie West and husband Rick; Lori Johnson and husband Lance; son, Tom Dolloff and wife Elizabeth; daughter Penny Linnemanston and husband Carl; many Grandchildren, Great Grand Children, and Great- Great Grandchildren; Duce the cat and many grand pets. The family would like to thank the folks from Northern Light Hospice for their professionalism and compassionate care. Visitation will be held on Tuesday, December 7th from to 5 to 7 PM, at Dolby, Blais & Segee Funeral Home, 35 Church Street, Westbrook, ME. A Funeral will be held on Wednesday, December 8, at 11:00 AM, at Dolby, Blais & Segee Funeral Home where a burial will follow at St. Hyacinth Cemetery.

Westbrook &#8211; Judith Danis, 81, of Westbrook, ME passed away at home, Tuesday November 30, 2021 surrounded by family. She came into the world on June 22, 1940 to Elroy and Evelyn Sawyer. Going to school and growing up in Portland, her... View Obituary & Service Information

The family of Judith Jane Danis created this Life Tributes page to make it easy to share your memories.

Westbrook –
Judith Danis, 81, of Westbrook, ME passed away at...

Send flowers to the Danis family.