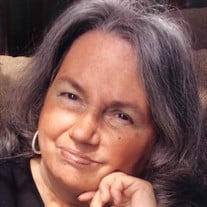 WESTBROOK—Judith Ann Burila, 76, passed away June 19, 2020 at the Gosnell Memorial Hospice House with her family by her side. She was born April 18, 1944, a daughter of Lewis and Ada (Prince) Harmon. Judy was a graduate of Westbrook High School. June 4, 1963, she married Francisco “Frank” Burila. Together they made their home in Westbrook and raised a son, Frank Jr. For decades, Judy was employed with the Portland Press Herald; she also worked for the Southern Maine Agency on Aging in the Meals on Wheels Program. Judy was a devoted wife and mother and was generous to others. Through the years, she enjoyed attending her sons athletic events at Westbrook High School and as he coached football for Mt. Ararat High School in Topsham, Maine. Judy was an extremely talented quilter, seamstress, and overall crafter. She had an aesthetic eye for color and created beautiful homemade goods. She took pride in her home both inside and outside which could be seen through her well-tended gardens. Over the years, Judy’s adventurous spirit led her to travel extensively which included trips to the Philippines. She is survived by her husband of 57 years, Francisco “Frank” Burila Sr.; her son, Frank Burila Jr. and his wife Melissa of Topsham; her two loving cats Randy and Suzi, her brother, Eugene Harmon, and niece Melody Harmon. She was predeceased by her parents and her brother, Peter Harmon. The family would like to extend a special thanks to special neighbors and friends, Kerri and Mike Fusco and their family, Dr. Patrick Connolly for his long-time care and endless compassion of Judy, and the staff at the Gosnell Memorial Hospice House. Services for Judy will be announced at a later date once COVID restrictions are lifted. A date and time will be announced. In lieu of flowers, memorial contributions in Judy’s name may be made to: Sam L Cohen Center 30 Barra Road, Biddeford, Maine 04005. Arrangements are in the care of the Westbrook Chapel of Dolby Blais & Segee, 35 Church St., Westbrook, ME 04092.

WESTBROOK&#8212;Judith Ann Burila, 76, passed away June 19, 2020 at the Gosnell Memorial Hospice House with her family by her side. She was born April 18, 1944, a daughter of Lewis and Ada (Prince) Harmon. Judy was a graduate of Westbrook High... View Obituary & Service Information

The family of Judith Ann Burila created this Life Tributes page to make it easy to share your memories.

Send flowers to the Burila family.