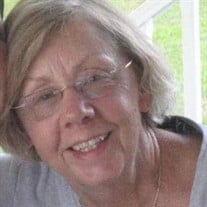 Beloved wife of William Chayer died peacefully in her sleep on April 13, 2022 after a long battle with Parkinson’s disease. Joyce was born on July 12, 1941 to Vernon and Marie Stewart in Farmington. Joyce lived a beautiful, dignified life. She was a devoted Catholic and a parishioner at St. Anthony’s in Westbrook. After graduating from Deering High School in 1960, she worked in administration for area businesses. On April 16, 1966 Joyce married William Chayer at Sacred Heart Church; Joyce and Bill settled in Westbrook and raised their six children. After her youngest started school, Joyce worked for the Westbrook School Department for 19 years. Joyce was selfless, funny and loyal, guided by her faith. She was an avid reader and moviegoer, who loved the ocean, ice cream, travel and going for long motorcycle rides with her husband. She enjoyed spending time at home with her lively family and was also content when they left; finally granting her the peace and quiet which was so deserved. Joyce is survived by her husband, Bill, who lovingly cared for her until she passed, and her children: Suzanne (Abbey) Chayer, Michele (Mike) Ridley, Michael Chayer, Marianne (Jay) Chayer-Randall, John (Denae) Chayer and William (Heather) Chayer Jr. Joyce is also survived by nine grandchildren: Mikel (Dane) Tupper, Olivia and Emma Ridley, Emily Chayer, Gwen Chayer, Hazen and Griffin Randall, Remy and Ellis Duke, two great grandchildren, Braxton and Everly Tupper, two sisters, Pamela Russo and Beverly Penfold, sister-in-law Janet Bradbury and many nieces and nephews. Joyce was predeceased by her parents, her sister Margaret Darling, her brother-in-law James Bradbury and his children Christine Clayton and Dennis Bradbury. Friends and family are welcome for visitation on Tuesday, April 26 from 5:00pm to 7:00pm at Dolby, Blais & Segee Funeral Home, 35 Church St., Westbrook. Funeral Mass at St. Hyacinth Church will be held on Wednesday, April 27 at 10:00am with a burial to follow at St. Hyacinth Cemetery in Westbrook. In lieu of flowers, please consider a donation to St. Jude’s Children’s Hospital.

Beloved wife of William Chayer died peacefully in her sleep on April 13, 2022 after a long battle with Parkinson&#8217;s disease. Joyce was born on July 12, 1941 to Vernon and Marie Stewart in Farmington. Joyce lived a beautiful, dignified life.... View Obituary & Service Information

The family of Joyce Chayer created this Life Tributes page to make it easy to share your memories.

Beloved wife of William Chayer died peacefully in her sleep on...

Send flowers to the Chayer family.