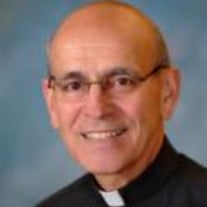 SOUTH PORTLAND – Father Joseph J. Koury, JCD, 76, of South Portland and formerly of Windham died Sunday, June 27, 2021 at Mercy Hospital in Portland. Born in Central Falls, Rhode Island on June 22, 1945 to Mariam Yousef Khoury and Elias J Koury Sr. whom were both born in Ma'ara Sednaya, Syria. Father Koury became a member of the New England Province of the Society of Jesus (the Jesuits) in 1968 and was ordained a priest in 1977. With a bachelor’s degree from the College of the Holy Cross in Worcester, Mass., and a Master of Divinity degree from the Weston School of Theology in Cambridge, Mass., Father Koury taught canon law courses at both the Weston School of Theology and Boston College. During this time, he also earned his doctorate in canon law from The Catholic University of America in Washington, D.C. Father Koury began serving as a judge in the Diocese of Portland’s Tribunal in 1983, work he performed for three decades along with his other responsibilities. In 1992, he began serving as campus minister at St. Joseph’s College of Maine in Standish, and in 1994, he was incardinated by the Diocese of Portland. One year later, Father Koury was appointed pastor of Our Lady of Wisdom Parish in Orono, becoming coordinator of campus ministry at the University of Maine at Orono at the same time. In 1997, he added pastor of St. Mary of the Assumption Parish in Orono to his responsibilities. In 2005, Father Koury was appointed administrator of St. Francis of Assisi Parish in Belfast, where he served until being named administrator of Our Lady of Perpetual Help Parish in Windham and St. Joseph Parish in Bridgton in 2008. One year later, he also became administrator of St. Anne Parish in Gorham and St. Anthony of Padua Parish in Westbrook. He retired from active parish ministry in 2015. In addition to his parents, he was predeceased by eight siblings. Father is survived by two sisters, Mary Theresa Koury Choquette of Pawtucket, RI and Frazia (Flo)Coningford and her husband, Paul of North Providence, RI. Father Joe was the uncle of twenty-two nieces and nephews, predeceased by three of them. Also the grand uncle of many. A Mass of Christian Burial for Father Koury will be celebrated Monday, July 19, 2021 at 2:00 pm at Our Lady of Perpetual Help Church, 919 Roosevelt Trail in Windham. Bishop Robert Deeley will be the celebrant. Fr. James Donlon of the Diocese of Albany will be the homilist. There will not be a wake. Burial will take place in the family plot in Rhode Island. In lieu of flowers donations can be made to Catholic Near East Welfare Association ( CNEWA), 1011 First Avenue, New York, NY, 10022-4195 tel:212-826-4195, for a youth educational project in Syria; or Social Justice and Peace Commission -Assistance Funds for Food and Housing, Our Lady of Perpetual Help Church, 919 Roosevelt Trail, Windham and St. Anne Church, 299 Main Street, Gorham.

The family of Reverend Joseph J. Koury, JCD created this Life Tributes page to make it easy to share your memories.