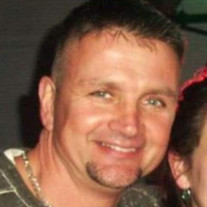 GORHAM-- Joseph (Joey) Martin Earles Sr died at age 55 after a long battle with pancreatic cancer. He passed peacefully in his sleep at home in Gorham, ME. Joey was born on July 29, 1965 to Lucy Radcliff Earles Morrill and John Richard Earles at Mercy Hospital in Portland. He grew up on Munjoy Hill and attended Portland schools. He was the baby of the family and one of six children. He was very close with his sister and brothers. As a teenager Joey lived in Florida for a few years with his brothers, and loved telling all his crazy stories from that time. In his early twenties he met Jane (Janie) Splude, whom he had his two children with, Kristine and Little Joey. Joey's kids were his pride and joy, and his entire world. He always put his children's needs before his own. When Kristine was little she lived with him in his one bedroom apartment. The bedroom was set up for Kristine, and he slept on a futon in the living room. He worked nights at Sam's Club while his mother Lucy watched Kristine, and he would always show up in the morning to bring her to school before he went home to sleep. His life revolved around her. When Little Joey was born, Big Joey couldn't have been more ecstatic to have a son. He had always wanted a son to do all the things his dad couldn't with him. He got Little Joey into sports as soon as possible, especially baseball. He was so prideful that his son was a "lefty pitcher" and he loved watching him play more than anything. (And had no shame in being that loud parent in the stands) He was the definition of a hard working single parent and so determined to make sure his children had a good life. He started his own Hardwood Floor installation company, Mainely Wood Floors, and got really good at his trade. He took great pride in his work. Joey had a close knit group of friends that he always kept in touch with. He spent his weekends on various softball fields in Maine with his Keg league team. His real passion was working out and weight lifting. He was very dedicated to staying strong and handsome as long as possible. He had a deep love for music and playing the guitar. Both his kids have vivid memories of being woken up late at night by Joey’s favorite Pearl Jam songs blaring from the basement as he played his guitar and sang along. Kristine would scold him to turn it down and he’d guiltily apologize, but do it again in a day or two. He always said he had missed his calling and should have been a rock star. He was loyal to all New England Sports teams and was a diehard Patriots fan. So much that he had the “Flying Elvis” logo tattooed on his bicep. He called football Sundays “Church” and had strict rules for them. If you praised another team in his house while the Patriots were playing, you were sarcastically asked to leave. For years he played pool on a weekly league, and won 2nd place at a national competition with his team in Las Vegas. He spent his summers piling his kids and their friends into his vehicle and venturing off to various lakes and beaches. Having a tan was top priority once the warm weather hit. He loved having his house constantly full of his kids and their friends. There could be half a dozen of them there for days on end and he would never question it, just hand them an occasional chore or two. He always said that’s what he missed the most about his kids being young. He was unapologetically childish himself, so hanging out with “all his kids” was his favorite. Spending holidays with his family was always something he looked forward to. His family always waited to see what his next inappropriate comment or joke would be around his mother's holiday dinner table. Joey was a loyal friend to all, and a loving father, son, and brother. He would do anything for those he loved. He always opened his home to any family member or friend in need. Joey was not afraid to speak his mind and always stuck up for the underdog. He was truly one of a kind and he will be deeply missed. Joey was predeceased by his father John (Jack) R. Earles, his brother Michael Earles, his sister, Trisha (Patty) M. Ham-Ying, and his children's mother, Jane (Janie) C. Splude. Joey will be sorely missed by his mother Lucy Morrill and step-father Ferdo Morrill, whom he lived with during his recent illness. His son Joseph M. Earles II, daughter Kristine P. Donatelli, and son-in-law Fausto Donatelli. His brothers Richard Earles, James Earles, and Stephen Earles. His sister-in-law Kimberly Wayne. His brother-in-law John Ham-Ying, niece Brianna Wayne, nephew Justin Wayne and significant other Marissa Wiley and their children. His nephew Richard Earles-Mitchell, whom he helped raise and thought of as a son, and his two children. Along with step-siblings Ann, John, and Lisa, and many extended family and friends. His wish was for everyone to remember him before his illnesses took over, so don't be sad. Think of those special Joey Earles memories, smile, and hold on tight to them. Joey didn't want a funeral, so he will be cremated and his family will be privately spreading his ashes on his favorite beach. Arrangements are in the care of the Windham Chapel of Dolby Blais & Segee, 434 River Rd., Windham, ME 04062.

GORHAM-- Joseph (Joey) Martin Earles Sr died at age 55 after a long battle with pancreatic cancer. He passed peacefully in his sleep at home in Gorham, ME. Joey was born on July 29, 1965 to Lucy Radcliff Earles Morrill and John Richard Earles... View Obituary & Service Information

The family of Joseph (Joey) Martin Earles Sr. created this Life Tributes page to make it easy to share your memories.

Send flowers to the Earles family.