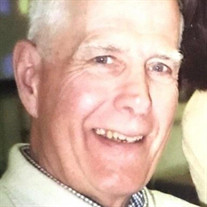 Joseph Michael Denehy Jr., 80, of Gorham, passed away on August 21, 2020. He was born in Boston, MA on December 6, 1939 to his parents, Joseph Michael Denehy Sr. and Dorothy (Robbins) Denehy. Joseph loved his faith, his family, and had many interests. He grew up in Waltham, MA, and it was there that he met his future wife, Marie when they were just 13 years old. In October of 1962, the two married and went on to have four children. Joe’s deep passion for connectivity to others through Boston-area sports began at a young age while attending Boston Braves games with his dad. He would go on to play baseball in the Waltham Pony League. This experience would take him to games in Pennsylvania, something that caused his working class family to swell with pride and created memories that were tender and cherished by him throughout his life. He played football, although baseball was his favorite sport to play at Waltham High School. Joe was also a member of the Army Reserves, and was stationed at Fort Sill, Oklahoma. Joe and Marie were known for a character of long suffering and commitment; together they raised a family and through several years of night school at Northeastern University, Joe graduated with a bachelor’s in engineering. Joe was also very proud of the fact that Northeastern awarded his wife an honorary degree for her herculean efforts in supporting the family. In April of 1975, Joe’s position at Data General brought he and his family to Gorham, Maine. Anyone who knew Joe understood him to be a devout Catholic, a man of faith who loved his God and was immensely proud of his beloved wife and family. He was a member of St. Anne’s church and served as an adult alter server during daily Masses. Saturday Mass was never missed, a memory held by his children. His grandchildren also remember years of “Papa” teaching CCD lessons at their dining room table. Understanding who he was and his source of his Irish pride was also a part of Joe’s life. He spent considerable time doing family genealogical research and history. Never one to withhold his life and feelings, he shared all his findings and adventures with all. He and Marie traveled to Ireland many times. He often jokingly called himself, “The Irish Dubber,” as he was a skilled craftsman and a man who always gave of himself. He would make and give Celtic crosses to family and friends, which were always greatly appreciated by all who received them. He loved sitting on the porch with Marie, fishing, and enjoying family at their cottage, “The Duck House” on Lake Winnepesaukee, NH. Joe was greatly hurt after the death of his life-long partner, best friend, and wife in 2014, but he decided to share the love he and Marie had by bettering himself and dedicating himself to be a kind and caring person to others. He was a member of the Gorham-Westbrook Rotary and Knights of Columbus. He volunteered with the Coats for Kids, and decorated his church at Christmas time; but above all else, he loved spending time volunteering at the Gorham House Preschool. Joseph is survived by his children Jo Anne M. Dunn of Old Orchard Beach, Jayne M. Denehy of Gorham, Janis M. Weed, and her husband Robert, of Gorham, and Joseph Michael Denehy III, and his wife Julie, of Westbrook; his grandchildren, Casey (Weed) Escobar, and her husband Jared, Ryan Weed, and Cullen Denehy; and his sister Denise Keirstead of Waltham, MA. He is predeceased by his beloved wife Marie, his parents, his son-in-law, Gene Dunn, and his brother-in-law Frederick Keirstead. His family would like to acknowledge the wonderful staff of Beacon Hospice Care, and the staff of Windsor II and Oxford at Gorham House, as well as the children and teachers at Gorham House Preschool for their tender love and care. The family of Joseph Denehy will receive friends and relatives on Tuesday, August 25, from 5:00pm to 7:00pm at the Gorham Chapel of Dolby Blais & Segee at 76 State St. His funeral service and burial will be private. In lieu of flowers, the family kindly asks for donations to the Gorham House Preschool.

Joseph Michael Denehy Jr., 80, of Gorham, passed away on August 21, 2020. He was born in Boston, MA on December 6, 1939 to his parents, Joseph Michael Denehy Sr. and Dorothy (Robbins) Denehy. Joseph loved his faith, his family, and had many... View Obituary & Service Information

The family of Joseph Michael Denehy Jr. created this Life Tributes page to make it easy to share your memories.

Joseph Michael Denehy Jr., 80, of Gorham, passed away on August...

Send flowers to the Denehy family.