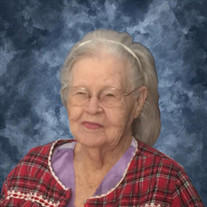 JOHNNIE EVELYN (Crocker) BARTER, 95, of Windham died peacefully on February 16, 2022 in Portland. She was born “about 2 miles south of Wickes, Arkansas”. The daughter of the late John Frank Crocker and Trudy Mae (Westmoreland) Crocker. Johnnie lived mostly in Louisiana and Mississippi as a young child, traveling a lot with her parents and her younger sister, Billie. At seventeen, she moved to Port Arthur, Texas where she met Bill Barter. They fell in love, and five months later were married. At nineteen, Johnnie, bundled up their baby girl, Kathy, and traveled by train to Bill’s home state of Maine while Bill worked his way to Maine on a boat, as he was a Merchant Marine. He arrived one month later. The family grew to include a son, Russell, daughters Linda and Pamela. A few years later, sons Timothy and Mark (now deceased) were born. The children were all raised in Scarborough until Tim and Mark were adolescents. They then moved to Virginia so Johnnie could be close to her aging mother until Bill’s death in 1990. Returning with her momma to Maine, Johnnie cared for her until she died in 1997. Johnnie is survived by her children Kathy J. Connolly of Westbrook, Russell G. Barter of Buxton, Linda VanDoren of Panama City Beach, Florida, Pamela G. Goodale, and her husband George, of Windham, and Timothy D. Barter, and his wife, Mary, of Dover, New Hampshire; ten grandchildren, and numerous great and great-great grandchildren. Visitation will be held Monday, February 21 from 9:00am to 10:00am at Dolby, Blais & Segee Funeral Home, 434 River Rd., Windham with a Memorial Service to follow at 11am at Grace Baptist Church, 476 Summit St., Portland. Burial will be private at a later date. Flowers are welcome, but if you'd prefer, donations in Johnnie's name to the cancer, diabetes or heart research foundation of your choosing is appreciated as well. Johnnie's service will be livestreamed from Grace Baptist Church via Facebook Live. To view the livestream, please visit https://www.facebook.com/GBCPortlandME/ at 11am On Monday, February 21.

The family of Johnnie E. Barter created this Life Tributes page to make it easy to share your memories.

Send flowers to the Barter family.