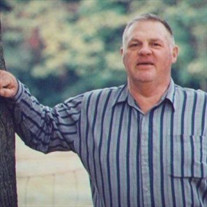 GORHAM - John Earl VanDorn, III, 80, passed away on June 8, 2021. Born in New Jersey to John E VanDorn, II and his wife, Helene, John was a hellion of a kid and proud of it. He often spoke of tormenting his teachers and occasionally skipping school to fish or hunt, returning with an elaborate story of why he missed school, knowing that his teachers knew just where he had been. John did his best to go against the grain when he could and dropped out of high school at 17 to run away and join the Marines. He earned his GED during his time as a Marine and after, he joined the police academy and took a job in his hometown of Oakhurst, working as an officer for the Ocean Township Police Department. John met his wife, Geraldine “Gerri”, through his brother’s now wife and they were soon married and raising a family of five children (the neighborhood kids nicknamed them the “Sex Machines”). He had many interests that he pursued, such as hunting, fishing, scuba diving, raising dogs, hiking, gardening and just working outdoors. He shared these interests with his children, as well as the skills of independence and resiliency. John earned his Bachelor of Science degree through night classes, working around changing night and day shifts, while raising five hellions of his own (he had a saint of a wife). John took an early retirement from the police force due to work injuries and played at private detective for a few years, before deciding it was time to pursue another dream of making a family farm. So, in 1985, he up and took the family to Ellsworth, Maine where they bought an old 30-acre farmhouse on a hill overlooking the Union River Bay and proceeded to learn how to be a self-sustaining farmer; which he did well, if not traditionally. John was shattered when he lost Geraldine to breast cancer in 1994. Though he tried to enjoy the bachelor life, he very much missed her and had worsening physical health. He still enjoyed spending time with his grandkids and their dogs and visited with them as often as he could. Despite his stubborn pride, he eventually accepted the need for assisted living in the Maine Veterans Home, where he discovered new friends in fellow, salty veterans and a sense of peace and rest as he had many caring nurses watching over him and to do his bidding for him. As John often said to many, “I lived the life I wanted. I did what I wanted, when I wanted.” John is survived by his brother, Peter VanDorn and wife, Maryann; sister-in-law Sr. Regina McTiernan; daughter, Kathleen Hamblen and husband, Mark; sons, Steven VanDorn, Christopher VanDorn, Daniel VanDorn and his wife, Jen VanDorn, and James VanDorn; grandchildren, Evan, Ava, and Boden VanDorn and Ryan, Kyle and Kyra Hamblen. A private service for immediate family will be held at a later date.

GORHAM - John Earl VanDorn, III, 80, passed away on June 8, 2021. Born in New Jersey to John E VanDorn, II and his wife, Helene, John was a hellion of a kid and proud of it. He often spoke of tormenting his teachers and occasionally skipping... View Obituary & Service Information

The family of John Earl VanDorn III created this Life Tributes page to make it easy to share your memories.