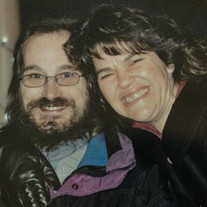 WESTBROOK – John R. Ranger, 52, passed away on June 18, 2021, at Gosnell Memorial Hospice House, after a long illness with heart disease. He was born on February 19, 1969, in Portland to John and Linda Ranger. Johnny was educated in Westbrook schools and was a member of the elementary and junior high school bands. During those early years, he enjoyed the many family camping trips and visits to various amusement parks with his brother and sister. During high school, Johnny worked at the local McDonalds owned restaurant, enjoyed good times with his friends and worked on his 1970 Pontiac GTO. Johnny graduated from Westbrook High School in 1987 and from Central Maine Vocational Technical Institute two years later, after studying Automotive Technology. He worked at Rowe Ford, VIP Auto Services and later at O’Reilly Auto Parts. With his vast automotive knowledge, Johnny helped many of his friends and relatives with their automotive problems. During his early twenties, Johnny raced Go-Karts at Beech Ridge and drag-raced his automobile at Oxford Plains. He liked to participate in car shows at Bonny Eagle and Old Orchard Beach with his GTO, pick-up truck, and T-bucket, which he built. Johnny and his fiancée, Joyce Bean, attended races at several speedways, including Daytona. Joyce predeceased him in 2015. Johnny enjoyed the Sunday dinner visits and the friendship he had with the Bean family. In addition to his parents; John is survived by his sister, Ann, her husband, Kevin and their daughter, Megan; his brother, Jeffrey, wife, Jacqueline and their children, Jonathan, Matthew, and Elizabeth. He is also survived by a large extended family of relatives and friends. A visitation to be held 1-3 p.m., Sunday, June 27, 2021 at the Windham Chapel of Dolby, Blais & Segee, 434 River Road, where a funeral service will be held 11 a.m., Monday, June 28, 2021. Burial at Woodlawn Cemetery, Westbrook will immediately follow funeral service.

WESTBROOK &#8211; John R. Ranger, 52, passed away on June 18, 2021, at Gosnell Memorial Hospice House, after a long illness with heart disease. He was born on February 19, 1969, in Portland to John and Linda Ranger. Johnny was educated in... View Obituary & Service Information

The family of John R. Ranger created this Life Tributes page to make it easy to share your memories.

Send flowers to the Ranger family.