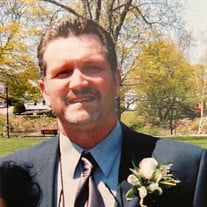 John E. Malier, 59, of Raymond, passed away on March 20, 2021. He was born on September 21, 1961 in Bridgton to parents John and Jean (Haines) Malier. John, affectionately called "Jackie" by his dear mother, grew up in Westbrook with his siblings, Jeff and Joy. He attended Westbrook schools and as child he enjoyed fishing with his family and friends. John had to grow up quicker than most when he started working full time immediately after high school at the age of 17. Shortly thereafter in 1981 he moved onto a career in the Army and proudly served nearly 12 years, throughout the Gulf War and Desert Storm. During his service he received a Bronze Star Medal, for his heroic actions while in active duty. When he finished his service in the Army John continued to work hard, getting a job as a spot welder at Precis Metals. It is here where he met his future wife, Tammy Rose in 1993. The two of them got married in 2003. Before retirement in 2008 due to a back injury, John worked for 12 years as a Concrete Cutting Supervisor at Engineered Products Company. John will be remembered for being an expert gardener, taking much pride in his vegetable garden at home. He never missed a Patriots game or a chance to play cribbage or cards with his friends. John and Tammy loved to travel together. They recently spent three amazing weeks in Atlantic Canada with their family on the vacation of a lifetime. He was a very kind, compassionate friend and always had a smile on his face and was often thinking of other people's needs before his own. John had a deep bond with his family and friends, and especially was close to his parents before their passing and loved spending time with his nieces and nephews. John also will be remembered for the love he had for his dog Sampson and cat Chloe. John is survived by his wife of 18 years, Tammy (Rose) Malier; brother, Jeff, and his wife Laura Malier; sister, Joy, and her fiancé Kevin Tracy; brother-in-laws, John Rose, and wife Christina, and David Rose, and his wife Edna; mother-in-law, Marjorie Rose-Terry, and her husband Ronald Terry; father-in-law, John, and his wife Geraldine Rose; nieces and nephews, Jesse Malier, Damian Thorne, MacKenzie Thorne, Drake Rose, Sarah Rose, Lily Rose, Mia Rose, Kalani Rose and Kyle Rose. He is also survived by his close friends of over 40 years, Kevin Golder and Paul Lavigne. John is predeceased by his father, John, in 2007, mother, Jean,in 2009 and his nephew, Jared in 2017. Visiting hours will be held on Saturday, March 27, 2021 from 11:00am-1:00pm at Dolby, Blais & Segee, 35 Church St., Westbrook. In lieu of flowers, please consider a donation in John's memory to New England Donor Services, 60 First Avenue, Waltham, MA 02451 or at https://neds.org/give/

John E. Malier, 59, of Raymond, passed away on March 20, 2021. He was born on September 21, 1961 in Bridgton to parents John and Jean (Haines) Malier. John, affectionately called "Jackie" by his dear mother, grew up in Westbrook with his siblings,... View Obituary & Service Information

The family of John E. Malier created this Life Tributes page to make it easy to share your memories.

Send flowers to the Malier family.