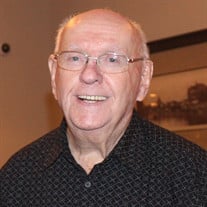 WINDHAM-- John T. Hawkes, 83 of Windham, passed away peacefully at Maine Medical Center on Tuesday, September 22, with his family at his side. He was born on September 9, 1937 in Gorham, Maine to Elwin and Mary Field Hawkes. He grew up on the family farm, a 9-acre parcel of land in Little Falls, where he helped hay and tended the livestock. He also would walk to the Daigle’s Potato Farm, where he was paid based on the number of barrels he picked. John loved baseball. As a kid, if the ground was free of snow and the chores were done, he was found playing with his friends on the neighborhood sandlot, “The Barnyard.” In the evenings, he would listen to baseball games on the radio, following his childhood hero, Bob Feller of the Cleveland Indians. They won the World Series in 1948 when John was 11 years old, and he was a diehard fan for the rest of his life. Later, he was a pitcher for Gorham High School, and coached summer baseball in Gorham for many years. Outside of baseball, John also enjoyed evening drag racing in his 1956 Ford, nicknamed “White Lightning”. John graduated from Gorham High School in 1955 and started working at L. C. Andrews Lumber Company in South Windham, where he met his future wife, Nancy. They married in 1959, and enjoyed 55 years together, until her death in 2014. John loved rock and roll music, raising his kids to love the greats, like Chuck Berry and Elvis Presley. John enjoyed over 30 years working at S.D. Warren in Westbrook. In retirement, after raising their family, John and Nancy spent several winters in Winter Haven, Florida to watch the Cleveland Indians during spring training. In the summer, they loved spending time with Joan and David at their camp on Sebago. John was also very active with the Little Falls Baptist Church where he was a Deacon. He also loved spending time with his children, grandchildren and great grandchildren. Family gatherings were always large, loud, and wonderful. He was predeceased by his wife of 55 years, Nancy Powers Hawkes, brothers Edwin and Carlton Hawkes, and sister, Esther Noble. John is survived by his sister Joan Tobin and his children, daughter Debra Hawkes Brown and husband Jim; son Robert Hawkes and Susan; daughter Pamela Hawkes Barr; daughter Theresa Hawkes LaMontagne and husband Fred; and son John Hawkes and Jenn. He is also survived by his grandchildren, Jeffrey Hawkes and Bridgette; Derek Hawkes and Nicole; Nicole and Jon Harris; Shannon and Jay Briner; James and Patricia LaMontagne; Sarah Brown; Greg and Ashley Barr; Elizabeth and Aneesh Sahni; and Lucas LaMontagne, as well as his great-grandchildren, Joshua, Natalie and Kelsie Harris; Alyvia Hawkes; Mason and Peyton Barr, Naomi and Noelle LaMontagne and Everett and Ethan Briner. A graveside ceremony will be held on Monday, September 28 at 10:00 on Hillside Cemetery in Gorham. In lieu of flowers, donation may be made in his name to the Little Falls Baptist Church. Arrangements are in the care of the Windham Chapel of Dolby Blais & Segee, 434 River Rd., Windham, ME 04062.

WINDHAM-- John T. Hawkes, 83 of Windham, passed away peacefully at Maine Medical Center on Tuesday, September 22, with his family at his side. He was born on September 9, 1937 in Gorham, Maine to Elwin and Mary Field Hawkes. He grew up on... View Obituary & Service Information

The family of John T. Hawkes created this Life Tributes page to make it easy to share your memories.

Send flowers to the Hawkes family.