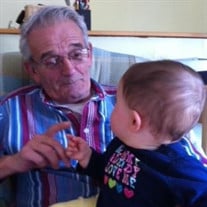 RAYMOND – John “Jack” L. Cooper, 79, passed away peacefully on Sunday, September 26, 2021 surrounded by his loving family. He was born in Portland on July 30, 1942, the son of Leon and Myrle (Dyer) Cooper. Jack graduated from Windham High School and went on to serve in the U.S. Coast Guard. He then spent many years working for Gordon’s Outboard, and eventually went on to become Code Enforcement Officer for the town of Raymond, the place he loved most, and where he also served several years as the Fire Chief. After retirement he enjoyed several winters as a snow bird in Silver Springs, FL. He enjoyed NASCAR and taking trips to The Café, socializing with the regulars over a cold beer. Though he was a homebody at heart and enjoyed living independently. In addition to his ex-wife, Pamela Cooper, who he remained close with, he is survived by his daughter, Jodi Morse and her husband, Jay of Otisfield; sister, Jean Reeves and her husband, Roger; brother, Leon “Buzz” Cooper, Jr. and his wife, Paula; grandson, Jamie Malcolm; and great-grandchildren, Zoey and Kadin. Many nieces, nephews, cousins and friends.

The family of John "Jack" L. Cooper created this Life Tributes page to make it easy to share your memories.

Send flowers to the Cooper family.