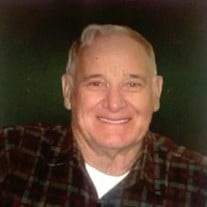 WINDHAM-- John W. Cooper, Jr., 95, of Windham passed away on March 25, 2021 in Portland. He was born in Falmouth, Maine in 1925 to John W. Cooper and Annie R. Train. John served in the Army as a truck driver during WWII. He was stationed in the Philippines with the 300th Infantry attached to the 8th Army. He was proud to serve his country, and in his retirement he was very active with the local VFW, playing a large role in building the Windham Veterans Hall. For many years he worked at Cushman’s Bakery in Portland as a carpenter. Having an eye for the big picture, he was able to create systems and machinery that increased efficiency. While at Cushman’s he met the love of his life, Winifred Chamberlain. She worked in the cookie room, and he said when he first saw her he knew she was the one. They never fought and were happily married for 49 years until her passing in 1999. After Cushman’s closed in 1964, he started working for the telephone company. He worked there for over 25 years and retired in the late 1980s as a maintenance specialist. The son of a carpenter, John was a skilled and resourceful craftsman. He could take apart and put together anything. John and Winnie had no children but were much loved by their nieces and nephews. He is predeceased by his wife, Winifred, and his siblings, Dorothy Crandall, Leon Cooper, Helen Pride, Gertrude Gavin, Evelyn Dudley, and Ralph Cooper. We can’t thank the staff at The Cedars enough for the care, compassion and companionship they provided. In the end they became an extension of the family. They were there for him 100% when we could not be. There are no visiting hours. A funeral service will be held Friday, April 2 at 2pm at the Windham Chapel of Dolby, Blais & Segee, 434 River Rd., Windham. A graveside service will be held on Wednesday, May 12 at 2pm at Smith Cemetery in Windham.

WINDHAM-- John W. Cooper, Jr., 95, of Windham passed away on March 25, 2021 in Portland. He was born in Falmouth, Maine in 1925 to John W. Cooper and Annie R. Train. John served in the Army as a truck driver during WWII. He was stationed in... View Obituary & Service Information

The family of John W. Cooper Jr. created this Life Tributes page to make it easy to share your memories.

Send flowers to the Cooper family.