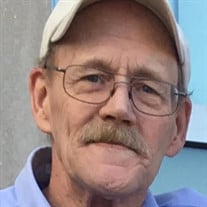 GORHAM—Joel Christopher Dalton, 70, passed away May 30, 2020 at Gosnell Memorial Hospice House. He was born December 24, 1949, a son of Albert and Frieda (Johnson) Dalton in Presque Isle, Maine. Joel was a 1968 graduate of Hampden Academy. He began working for New England Telephone Company in the fall of that same year as a cable splicer and remained employed for 39.5 years before his retirement. He enlisted in the Army Reserves and obtained the rank of E7 as a Drill Sergeant. He enjoyed providing for his family, and even in retirement, he had a job working for John’s Maintenance. An outdoorsman, Joel enjoyed hunting, camping and snowmobiling. Proud of his strong Irish heritage, Joel was a family man, a loving husband and father who took excellent care of the ones he loved. He will be remembered for his selfless personality, quick wit and infamous “Dad” jokes. He is survived by his son, Matthew Dalton, his partner Rosanna Phean and daughter Madison; four siblings, Shawn Dalton and his wife Mary, Kim Dalton and his wife Tammie, Andrew Dalton and his wife Ann Marie, and Rita Bronson and her husband Don; along with many nieces and nephews. He was predeceased by his wife, Lynn Dalton and his daughter, Emily Shepard. Visiting hours will be held 10:00am until 12:00noon on Friday, July 10, 2020 at the Windham Chapel of Dolby Blais & Segee, 434 River Road, where a memorial service will begin at noon followed by interment at Brooklawn Memorial Park, 2002 Congress Street, Portland. In lieu of flowers, please consider a donation to the American Cancer Society or Gosnell Memorial Hospice House.

GORHAM&#8212;Joel Christopher Dalton, 70, passed away May 30, 2020 at Gosnell Memorial Hospice House. He was born December 24, 1949, a son of Albert and Frieda (Johnson) Dalton in Presque Isle, Maine. Joel was a 1968 graduate of Hampden Academy.... View Obituary & Service Information

The family of Joel C. Dalton created this Life Tributes page to make it easy to share your memories.

Send flowers to the Dalton family.