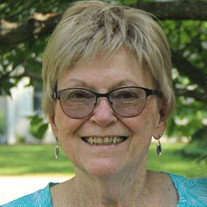 STANDISH, Maine — Joan Anne Olson, 75, died Friday, Aug. 21, 2020, at home after a valiant two-year battle with cancer. Joan Anne Lindsay was born Nov. 9, 1944, in Tucson, Arizona, and adopted by Mildred “Jakie” (Newhall) and Charles Lindsay of Bennington, N.H. Joan graduated from Hillsboro High School in 1962 and the University of New Hampshire in 1966, where she met and later married Paul Smith, giving birth to Lindsay Paul Smith in 1972. She earned her Master's degree in Library Science from the University of Rhode Island in 1980. She worked as a librarian for the Phillips Exeter Academy Library in Exeter, N.H., and the York Public Library in York, Maine. Joan "re-met" Paul Olson at their high school reunion, and they were later married on Jan. 12, 1991, in Hampton, N.H. They moved to Burlington, Vt., and together they managed a motel. Joan also worked in the mortgage department at Chittenden Bank in Burlington. They retired in 2010 and moved to Standish, Maine, to be closer to Joan's son and family. Joan joined Standish Congregational Church in 2011 and was an active member in the choir, served on the Board of Trustees and led the Missions Committee for many years. She also led the kitchen crew at the church’s monthly meals and served as the church librarian. As a member of the Caring Connection, she received training for lay visitation and worked with the pastor in congregational caregiving. A woman of great faith, Joan was known as “Jammy Grammy” to her grandchildren because she loved her pajamas as well as her playful socks. Joan was an avid gardener and amazing cook — often planning her days around breakfast, lunch and dinner, which included lobster, clams or steak on the best days — who also loved to cross-stitch and knit, win at Yahtzee, dominate at Trivial Pursuit, and dote on her cat, Baby Girl. Joan is survived by her husband Paul of 29 years, her son Lindsay Smith, his wife Laura and her grandchildren Sophie and Charlie Smith of Kennebunk; her half-sister Adreanne Lindsay Smith and nieces Bobbi Lindsay and Robin Lindsay. Joan's brother William Lindsay died in 1983. The family held a private service, led by the Rev. Cynthia Bland-Biggar. The Rev. Biggar will officiate a public memorial service via ZOOM at 9:30 a.m. Sunday, Sept. 27, from Standish Community Church. Arrangements are under the direction of Dolby-Blais and Segee Funeral Home in Windham.

The family of Joan Anne Olson created this Life Tributes page to make it easy to share your memories.

Send flowers to the Olson family.