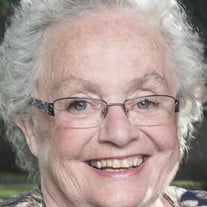 Joan L. (Derosier) Daigle of Windham, Me, formerly from Van Buren, ME January 16, 1931 to March 11, 2021 WINDHAM-- Joan lived the rich and full life that we all dream of; she and her forever partner Richard were united in love and in life for 65 years, with a bond that kept them together even when they were apart. For many years Richard worked away from home, leaving Joan to graciously manage the homestead, the children, and the “damn cow”. When they were together, they shared “date night”. They enjoyed a passion for dancing, and the style and grace they showed on the dance floor was envied by many a jealous onlooker. She loved to entertain, knowing when to “add water to the soup” to make sure there was enough for everyone (if you went home hungry, it was your own fault). The kitchen was the center of the home, and all of her children learned from her example, learned her recipes, as Richard took charge of throwing the ployes. She savored a good martini with friends and family, and relished holiday gatherings that were always boisterous and full of laughter. She made amazing pies. Her grandchildren loved taking the four-wheeler into the woods to pick berries for the filling. Joan graduated college with a nursing degree from Carney Hospital, and worked as a nurse for many years, before ending her career as a charge nurse at Borderview Nursing Home in Van Buren, Maine. She was organized, efficient and a master of paperwork and patient advocacy. In her later years she and Richard moved to live with their son, Charles, in Windham, Maine where they had a small apartment closer to family. She loved traveling to visit her children and grandchildren, and remained independent until the end, thanks to the love and support from Chuck and Anne. Joan will be missed by many. She is survived by Richard and five children, Robert and Trina Daigle of Newmarket, NH, Carol Daigle and Steven Weiss of Longmeadow, MA, Charles and Anne Daigle of Windham, ME, Patricia Daigle and Dennis Hopkins of Lakewood, WA and Peter Daigle of Vermont. She also leaves 11 grandchildren, Sam St. John , Frank and Kaitlin St. John, Eric Weiss and Miroki Tong, Rachel Weiss and Andrew Sia, Matthew Weiss, Lukas Daigle and Alyssa Turner, Kaitlyn and JJ Soupakhot, Myya Daigle, Andrew Daigle, Marlee Hopkins and Ruby Hopkins, as well as honorary grandchildren Sarah Cohn and Chutong Zhu, and her 5 great grandchildren Madison Daigle, Rylan Soupakhot, Keira Soupakhot, Arone Soupakhot, and Fredrick Sia, in addition to numerous nieces and nephews, great nieces and nephews and cousins. She is further survived by 2 sisters Claudette and J. Wilfrid Parent of Maryland, and Barbara and Daniel Berube of Gorham, Maine. She was predeceased by daughter Rose Marie (Robert) St. John of Argyle, NY, and her siblings Leola Gagnon, Roger Derosier and Jacqueline Derosier. The family will be holding a private memorial service. A public visitation will be held on Saturday, April 3 from 12noon to 2pm at the Windham Chapel of Dolby Blais & Segee, 434 River Rd., Windham. To view a live stream of Joan's memorial service on April 3 beginning at 11am, please click here: https://zoom.us/j/97202118723

Joan L. (Derosier) Daigle of Windham, Me, formerly from Van Buren, ME January 16, 1931 to March 11, 2021 WINDHAM-- Joan lived the rich and full life that we all dream of; she and her forever partner Richard were united in love and in life for... View Obituary & Service Information

The family of Joan L. (Derosier) Daigle created this Life Tributes page to make it easy to share your memories.

Send flowers to the Daigle family.