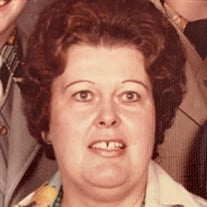 Joan C. Bradford, 85, passed away on July 4, 2020 at Gosnell Memorial Hospice House surrounded by her family; (sons, David Jr., Gregory, Christopher and Gregory’s partner Patti Estes.) She was born March 23, 1935 to Carroll W Sr. and Thelma J (Smith) Hodgdon. Joan grew up in Portland and was a graduate of Portland High School class of 1953. On August 12 of 1953 she married her teenage sweetheart, David R. Bradford Sr. For the next 14 years Joan and David resided in Portland. During this time Joan gave birth to their first child, David R. Jr., on April 27 1956. A second child, Gregory, was born on April 19, 1966 and a third, Christopher, was born September 15, 1967. Joan was employed by H.P. Hood & Sons as a senior clerk/office manager from 1953 to 1965. In 1966, with a second child on the way, Joan became a full time homemaker and mother to care for her young and growing family. After many years of raising a family, even with all her children grown she never stopped being a mother. She would continue to worry and be concerned for her family and be there to help no matter the circumstances. In November of 1987 her husband, David Sr., was diagnosed with Alzheimer’s at the age of 54. For the next six years Joan cared for her husband at home up until just several months before his death in 1994. On January 3rd, 2020 Joan was diagnosed with dementia. She was very much aware of her diagnosis, yet there were times she found it difficult to except as did the rest of us. Joan was determined to remain at home where she felt most comfortable despite the obvious challenges this presented. We did our best to honor that especially in light of the fact our mother was reluctant to except outside help. Over the years Joan also enjoyed watching the old 1940’s musicals from her childhood years, especially those with Betty Grable and Esther Williams. She had several small dogs throughout the years, poodles and shih tzus, that she would pamper and spoil much to her delight. She would often donate to the Animal Refuge League. Looking back it seems to me that my mother spent the majority of her life looking after loved ones, never asking anything in return, simply being content to spend time with her family. I imagine as it is with everyone who loses a loved one there are regrets of things left unsaid, wishing you could have done more or had a little more time. I find myself asking if there really is such a thing as enough time (No). These are the kinds of thoughts that can haunt you a life time. The one thing that I am sure of is that words alone can never describe how much she will be missed. Not a day will pass without her being in our thoughts. Even though we all know that death is a part of life somehow that doesn’t make it any easier or the pain of the moment any less. I really believe with every breath I draw that if all it took to live forever was to be loved than our mother would have lived forever. We love you mom and miss you, always and forever. Joan is survived by her sons, David Bradford Jr., and his wife Lois Sawyer, Gregory Bradford, and his partner, Patti Estes, and Christopher Bradford; a granddaughter, Brittany Blake, and her husband Raymond; and one great grandson, Landon. She was predeceased by her husband; two brothers, Donald Hodgdon and Carroll Hodgdon Jr,. A period of visitation will be held on Saturday, July 18, 2020 from 1:00pm to 2:00pm at the Westbrook Chapel of Dolby Blais and Segee, 35 Church Street, Westbrook, ME 04092, where a memorial service will begin at 2:00pm. In lieu of flowers, memorial donations in Joan’s name may be made to the Animal Refuge League of Greater Portland, P.O. Box 336, Westbrook, ME 04098.

The family of Joan C. Bradford created this Life Tributes page to make it easy to share your memories.

Send flowers to the Bradford family.