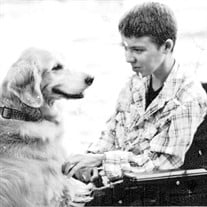 Standish – Saturday the world lost an amazing young man. Jesse T. Jordan, 27, passed away at home with his family, and loyal companion and service dog, Radar, by his side on Saturday June 27, 2020. Jesse was born in Portland, Maine on June 14, 1993. Jesse was the embodiment of perseverance as he never let Muscular Dystrophy get in his way. He graduated with honors from Bonny Eagle High School and received several standing ovations during the graduation ceremony. Jesse was praised by his classmates for demonstrating outstanding strength and courage against all odds. Jesse and his friends were always getting into trouble at school, taking turns riding down the hallway on his wheelchair doing wheelies. Outside of school they enjoyed piling into the van to go to the movies, slot car racing and eating hot peppers. Jesse was an avid video gamer. Jesse spent hours decorating his game room to a pirate theme and was always thinking of ways to make it “cooler”. Jesse also loved to fish, however he couldn’t catch a fish no matter how hard he tried, even when his cousins would get under the dock and push the fish out to his fishing line. Jesse loved his customized 1978 Chevy Shorty van. He also loved custom building model cars. Jesse’s other loves were his service dogs. His first dog was “Wini”, who was a dedicated and loyal companion until she retired. “Radar” was Jesse’s next service dog, while he also was a loyal and loving companion, and perhaps not as dedicated, Radar has always provided comic relief. Jesse is survived and dearly missed by his parents Tina and Hank Gagnon, of Standish, his sister, Mykenzy Gagnon and her partner Steve Talbot of Buxton, his father, Corey Jordan and Leone of Hiram, his step and half-brothers Beau Gardner and Jack Jordan, his Nanne and Papa (Dick and Judy Elliott) of Standish, Grampy Brown (Mike) and Joan, of Baldwin, Grampy and Grammy Hawkes (Steve and Donna Hawkes) of Steep Falls. Aunts and Uncles, Kim and Jim Storey of Cumberland, Kim and Jeff Wells of Windham, Tammie and Dean Sprague of Fairbanks Alaska and many cousins. Jesse will also be missed by his adopted jeep family and his best buds, Joe Nelson, Nic Bishop, and Nick Gryskwicz, as well as his long-term caregiver Ben Anderson. Jesse will especially be missed by Radar, who will be given an unlimited amount of love and biscuits. Arrangements for a Celebration of Life will be announced at a later date.

Standish &#8211; Saturday the world lost an amazing young man. Jesse T. Jordan, 27, passed away at home with his family, and loyal companion and service dog, Radar, by his side on Saturday June 27, 2020. Jesse was born in Portland, Maine on... View Obituary & Service Information

The family of Jesse Tyler Jordan created this Life Tributes page to make it easy to share your memories.

Send flowers to the Jordan family.