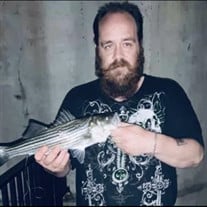 Listen...Jeremy Scott Stoddard, 39, finally got so high that he reached the pearly gates on December 6, 2020. Jeremy enjoyed being with his family and friends, so much so, it didn’t matter what activities you were doing...he was down for that. He loved helping his family out, working with his uncle Jeff on cars, fishing for stripers and trout with Tyler, Brandon, uncle Jeff, Dwayne and uncle Don, hanging out with Mary Jane and Sam, camping, shooting pool, ghost hunting, magic, making people laugh, forcing Tyler and Brandon to join him in an alien abduction and was an avid coffee drinker (can we go to Cumbie’s?). He was predeceased by his father, Glen Stoddard; and mother, Roberta “Robyn” Stoddard; paternal grandparents, Reinald Alexander, Evelyn and Kenneth Crosby; maternal grandmother, Patricia Barnhart; and uncle, Donald Ward. Jeremy is loved and survived by his children, Christine and Logan; longtime companion, Mary Jane; brothers, Dwayne Ward and his wife, Desiree, Tyler Stoddard and his wife, Katana Laverriere; and brother-from-another-mother, Steven Chavez and his wife, Jen; sisters, Samantha Ward and Nicole Stoddard; uncles, Raymond Barnhart, Mike Barnhart and his wife, Kathy, and Jeff Barnhart and his partner, Roxanne Silver; aunts, Debbie McGowen, Jackie Knoll, and Gayle Stoddard; cousins, Josh, Raymond, Mike “Rob”, girlfriend Stephanie, Ryan, Vanessa, Ashleigh, Brandon, girlfriend Riananna, Alex, Brooklyn, Chrissy, boyfriend Waldo, Amanda, and George; niece, Melanie; and nephew, Colton. No funeral or memorial service will be immediately planned. Burial at Dolley Cemetery, Windham will be at a later date. Fly high, Jeremy! We love you and miss you!

Listen...Jeremy Scott Stoddard, 39, finally got so high that he reached the pearly gates on December 6, 2020. Jeremy enjoyed being with his family and friends, so much so, it didn&#8217;t matter what activities you were doing...he was down... View Obituary & Service Information

The family of Jeremy Scott Stoddard created this Life Tributes page to make it easy to share your memories.

Listen...Jeremy Scott Stoddard, 39, finally got so high that...

Send flowers to the Stoddard family.