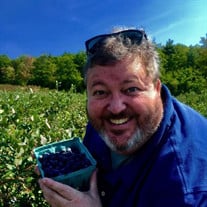 On Wednesday, November 10th, 2021, Jeffrey S. Files of Windham, Maine left this world for greener pastures. Born in 1970 in Portland, Maine, Jeff was brought home to Brookhaven in Windham by his parents William “Bill” E. Files and Linda A. Files to live with his brother Gregory “Greg” W. Files and soon thereafter was joined by their sister Pamela “Pam” A. Files (Cates). Shortly after the arrival of Pam, the family moved to a farm on Route 100 in Gray, Maine where Jeff enjoyed finding ways to convince others to do his chores. Ever the trickster, the comedian, and the joker, Jeff excelled at being loved by all. He had a way of making everyone feel included, in his unique and slanted view of the world mostly through relentless-good-natured teasing. Growing up he spent his time pretending to weed the gardens, building forts in the woods with his brother, and playing on the living room floor with his little sister. Jeff grew up in the church, both Cornerstone Assembly of God and Windham Assembly of God. He graduated from high school at Windham Christian Academy. It was at both church and the Academy that Jeff made many lifelong friends Richard, Ron, Jen, Heidi, Matt, Rich and countless others. Prior to and following graduation, Jeff’s involvement with YWAM (Youth With A Mission) during which he traveled to Mexico and worked with indigent children, made a profound and lasting impression on him. It was also at the Academy where he met his love, Susan M. Files (Perkins). Jeff and Susan married in 1993 and soon thereafter welcomed their daughter Lilly M. Files into their home. Their son Jacob M. Files followed several years later. Jeff spent countless hours devoted to embarrassing his children (his other family, his friends, and sometimes his acquaintances or just people on the street) in both public and private. Jeff’s devotion to Susan and his children was unwavering, he was a family man to the core. His commitment to the larger family was evident as well, particularly when it came to an annual gathering in the summer months. Jeff participated by creating unique and fantasy-filled games for the kids when they were young including a treasure hunt with an elaborate code contraption. As the kiddos grew, Jeff became the keeper of the family’s annual washer’s tournament. Jeff used a program to create teams and required each team to come up with a name before they could officially enter the competition. He was even given a megaphone in recent years to announce the matches and make commentary that only Jeff would think of. Each year, the day became more and more the Jeff Files’ show and we all welcomed it. Jeff spent the last 15 years at BlueTarp Financial and was one of the original 6 members of the customer service team. As in all other areas of his life, Jeff brought his distinct and slightly off kilter view of the world to his profession whether it was solving customers’ problems, mentoring new employees, or completely filling his coworker’s office with balloons. Well known among family and friends as a poet and writer, Jeff’s poems and stories brought love, laughter and groans to all. “My Father’s Eyes”, “The Ballad of Joe Quirion”, “Odessa Rose & Her Runny Nose”, and “The Ballad of Ellen Alyce” will live long in the hearts and minds of all who read them. Never one to shy away from well, really anything, Jeff approached life with an openness that is truly rare in this modern world. He will be sorely missed by his family, his friends, his friends’ friends, and even those random people on the street who saw him doing something “Jeff”. Arrangements for a Celebration of Life will be made for Summer 2022. Details of celebration will be announced at a later date.

The family of Jeffrey S. Files created this Life Tributes page to make it easy to share your memories.

Send flowers to the Files family.