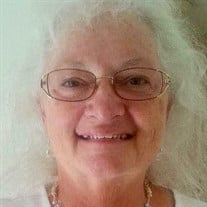 Jeanne Anna Wright, 74 of Windham, passed away March 4, 2022 at home with her beloved husband Morris and her daughters by her side. She was born Feb 23, 1948 in Dorchester, MA to E.Edward and Elizabeth Carter. She grew up in Dexter ME where she met and married the love of her life. They were happily married for 54 years. Jeanne attended the University of Southern Maine and went on to be an executive assistant for multiple presidents of Casco Northern Bank. She retired from Lee Auto Mall as Shep Lee’s personal assistant. Upon retirement she became a prolific quilter winning numerous awards for her work. She never sold any of her quilts but gifted many to lucky recipients. Her true gift was hospitality. Family, friends, and strangers alike were welcome at her table. She lovingly crafted memories for all who knew her. From her Thanksgiving Tea and Sister Sleepovers, to her Mardi Gras and holiday dinners, to picking up sailors who could use a warm meal and conversation, she would feed all. (AND still have leftovers!) Thanksgiving was her ultimate favorite and family knew that there was no where else to be! A born leader, Jeanne was a Girl Scout and a member of the International Order of Rainbow for Girls in her youth. As an adult she served as Mother Advisor for Rainbow at both the local and State level. Many women still fondly refer to her as Mum Wright. As a member of the Jaycees she participated in a National speaking competition in 1977 where she won 5th place with the theme “Today’s Woman has a Choice.” In Later years she spent countless hours researching genealogy and became a member of the Daughters of the American Revolution and the Mayflower society. Jeanne was a long time member of the NWUC where she served in many leadership roles including Moderator, Deacon, Choir, Sunday School teacher, mentor and always in the kitchen. She was also a member of the Venice FL UCC. She loved to travel and would keep detailed journals. She was never shy to ask for a tour of any place she saw along the way. This was a lesson she taught her grandchildren- It never hurts to ask, the worst they can say is no. She is survived by her husband Morris; daughters Cathy Dodge of Windham and Wendy Martin and husband Scott of Raymond; grandchildren Aaron and wife Dylan, Eri, Sam, Anna, Abby and Jonah. She also leaves behind her sister Carol Wallace and husband Leonard, brother-in-law Dana Bowden, and is predeceased by her sister Susan Bowden and son-in-law Shane Dodge. Services will be held at the North Windham Union Church on March 20th at 1:00pm.

Jeanne Anna Wright, 74 of Windham, passed away March 4, 2022 at home with her beloved husband Morris and her daughters by her side. She was born Feb 23, 1948 in Dorchester, MA to E.Edward and Elizabeth Carter. She grew up in Dexter ME where... View Obituary & Service Information

The family of Jeanne Anna Wright created this Life Tributes page to make it easy to share your memories.

Send flowers to the Wright family.