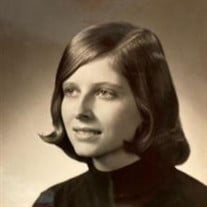 STANDISH - Surrounded by family and nestled into a favorite quilt, Jeanne Marie (Holmes) Stevens, 71, passed away April 7, 2022, following a brief illness. Jeanne was an artist with a needle and thread. She will be missed by family and her many friends – and by scores of people here in Maine and beyond whose lives she touched with her quiet acts of giving. A master quilter, Jeanne created more than 1,000 quilts (perhaps many more) in her lifetime – and gave many of them away. Some went to family; many more to charities. She and her quilting friends created and donated more than 100 quilts to the Gosnell Memorial Hospice House in Scarborough, where Jeanne spent her final days. She made quilts for Camp Sunshine, a Sebago Lake retreat for children with life-threatening illnesses and their families. When a local school launched a backpack food program sending food home to families for weekends and school breaks, Jeanne crafted and donated more than 70 backpacks – one for each child who needed one. And when a local family lost their home to fire, Jeanne showed up with quilts for each family member, so they would have something. Those are just a few ways Jeanne brightened others' lives. What brightened her days was spending time with her grandchildren, her children and her many friends and relatives. Jeanne is survived by her husband and best friend of 50 years, David Stevens; son Glenn Stevens of Wheaton, Maryland; daughter Ellen Stevens of Leeds; and daughter Rachel Ladd and her partner, Eric Wood of Sebago, along with granddaughters Grace Ladd and Penelope Wood and grandson Nathaniel Wood. Other survivors include brother Michael Holmes and his wife, Sheila, of Seabrook, NH; brother Kendall Holmes and his wife, Deborah, of South Gardiner; brother-in-law Paul Stevens and his wife, Mary, of Jay; and many nieces and nephews and cousins. She was pre-deceased by her parents, Martin and Helen Holmes, of Portland. Jeanne graduated from Falmouth High School and attended the University of Maine at Farmington and the University of Southern Maine. When she was in her 50s, she became a certified nurse assistant and worked for several years at the Maine Medical Center. Jeanne was a long-time member of the Pine Point Quilters and the Casco Bay Quilters; a founding member of the St. Anne's Sewing Club; and she was active as well with the Salvation Army Women's Auxiliary. She volunteered with Catholic Charities to teach recent immigrants to the Portland area how to sew. She volunteered with the Southern Maine Chapter of the “Dress a Girl Around the World” program, which makes and donates dresses to girls living in poverty. She knit hats and sewed blankets for years for kids at the Barbara Bush Children's Hospital. She also was active in a variety of charities in the Bangor region as a younger woman, when her children were growing up, especially at the soup kitchen at All Souls Congregational Church. A memorial service will be held on Tuesday, April 12, 2022 at 11AM at Dolby, Blais & Segee Funeral Home, 434 River Rd., Windham, ME 04062. In lieu of flowers, Jeanne's family asks that you consider offering a donation in her honor to Camp Sunshine, 35 Acadia Road, Casco, ME, 04015 (also https://www.campsunshine.org); or to Standish Food Pantry, PO Box 463, Standish, ME, 04084.

STANDISH - Surrounded by family and nestled into a favorite quilt, Jeanne Marie (Holmes) Stevens, 71, passed away April 7, 2022, following a brief illness. Jeanne was an artist with a needle and thread. She will be missed by family and her... View Obituary & Service Information

The family of Jeanne M. Stevens created this Life Tributes page to make it easy to share your memories.

STANDISH - Surrounded by family and nestled into a favorite quilt,...