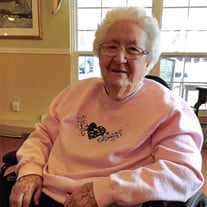 Jeanette B. Greer, 99, passed away peacefully at the Hawthorne House in Freeport, ME on October 26, 2020. Jeanette was born in Woodsville, NH on April 11, 1921 to Joseph and Elsie Baker, one of 9 children. She attended local schools and graduated from Newbury, VT high school in 1940. In 1942 she married her high school sweetheart John H. Greer and began her married life in Newbury. There they welcomed their son John in 1944 and their son Timothy in 1946. A job opportunity for John led the family to Portland, ME where their daughter Linda was born. After a transfer led the family to Berlin, NH for eight years, the Greer's moved back to Portland for good. After being a full time mom, Jeanette was employed by Casco Bank for over 20 years, retiring in 1983. She was a great cook, loved to garden and sew and to dote on her grandchildren. Jeanette was predeceased by her husband John in 1983 and by her eight siblings, sisters Leona, Alice, Gladys, Doris, Edna and Helena and brothers Wilfred and Lawrence. She is survived by her son John Greer and wife Marjorie of Cascade, MT, son Timothy Greer and wife Suzanne of Windham, ME and her daughter Linda Morris and husband Stephen of Portland, ME. She is also survived by her grandchildren, Rhonda Morin, Rahsaan Morin, Jeffrey Morris, Heidi Galindez, Gretchen Frederick, John Robert Greer and Jennifer Greer and seven great grandchildren. Jeanette will be interred in the Spring in Newbury, VT at which time a celebration of her life will be held. The family wishes to extend its profound thanks to the staff at the Hawthorne House who treated us like family and gave Jeanette the kindest, best care possible for five plus years. You all are incredible.

Jeanette B. Greer, 99, passed away peacefully at the Hawthorne House in Freeport, ME on October 26, 2020. Jeanette was born in Woodsville, NH on April 11, 1921 to Joseph and Elsie Baker, one of 9 children. She attended local schools and graduated... View Obituary & Service Information

The family of Jeanette B. Greer created this Life Tributes page to make it easy to share your memories.

Jeanette B. Greer, 99, passed away peacefully at the Hawthorne...

Send flowers to the Greer family.