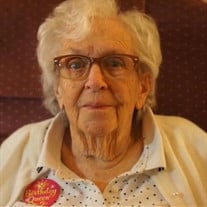 WINDHAM-- Jean Donahue Keef, 95, travelled on to her eternal home on September 24th after a brief illness. She was born in Veazie, Maine January 3, 1925 to Helen Berdeen Donahue and Ross Walton Donahue. Her dad was a U.S. Customs Agent on the Canadian Border. The family lived in many border towns including Vanceboro, Maine where she met her beloved husband, George Arthur Keef. They married while Jean was attending the University of Maine and subsequently moved to North Carolina where George finished his tour of duty with the Marine Corps during WWII. They moved back to Maine and eventually settled in Windham where they remained the rest of their lives. The couple had six children, Martha Strout (Ronald) Windham, Karen Lothrop (Thomas) Longwood FL, Dan Keef (deceased) (Debora Tancrel, Casco), Edward Keef (Sherron Sawyer) Daytona Beach, FL, William Keef, Thorndike, ME, David Keef (Jennifer Wallace), South Portland. The couple also considered Inger Johanne Myrstad Riley of Thiensville WI a surrogate daughter. She had been an AFS student from Norway who lived with the family in 1963-64. The family continued to be close and Jean and George and other family members took several trips to Norway for special occasions. The couple had 13 grandchildren and 24 great grandchildren who loved their “GG”, especially since she always took time to talk with them and learn about their interests and activities. In her younger years Jean was involved in many community activities including Land of Lakes Garden Club, Ladies Auxiliary, AFS and was an active member of the North Windham Union Church, where she sang in the choir. She also visited area assisted living facilities for several years with a group of women who sang “old time” songs to the residents. She enjoyed painting, reading, and was a talented writer. Her letters always exuded warmth and were very much enjoyed by family members before modern communication platforms came into being. Until recently she wrote in her diary every day. Jean was a master at Scrabble and enjoyed Cribbage and other card games. She was a “cat whisperer” and enjoyed their Siamese cat, “Sham-poo”, as well as her “grand cats”. When the couple first moved to Windham, they owned a poultry farm where Jean dressed two freshly killed chickens for every Sunday dinner. In the 60s the Keefs were active partners in the Sebago Basin Tenting Area (now the site of WalMart,) where she worked in the office. Jean attained a certificate in accounting and was the bookkeeper for their business founded in the 70s, the original Frost and Flame (named by her) on Route 115, a store that sold bikes, cross country skis, and airtight woodstoves. During the 60’s the Keefs built a cabin on Eustis Ridge which has served as a hunting and fishing getaway for the family. Jean loved fly fishing for trout with their son, David. They enjoyed many summers and a few winter trips to cross country ski with various friends and family members. After George’s retirement they wintered in New Smyrna Beach, Florida where they shared a home with Jean’s brother, Bob Donahue, and his wife, Oral. They all enjoyed shuffleboard, Cribbage tournaments and walking the beach. In George’s 80th year the couple took a cruise to Alaska with their two daughters and spouses and another trip to Scotland, England, Netherlands, Belgium, and France; trips that produced many happy memories. They enjoyed a harmonious 67-year marriage punctuated with love, laughter, and big family gatherings. After George passed on in 2011, Jean stayed in Florida with Karen in the winter and in Maine with her “3 daughters'” help the rest of the year. She faced widowhood with bravery and strength and continued to enjoy cards, audio books, endless Scrabble games, and visits from family members. Jean lived life with an abundance of faith and a great sense of humor. Everyone who knew Jean described her as sweet, loving, and compassionate. She was a “mother figure” to everyone who knew her. She will be greatly missed by all. An online virtual service in Jean’s honor will be held at a date and time to be announced. For updated information or to express condolences, please visit www.DolbyBlaisSegee.com. A celebration of her life will also be held sometime in Summer of 2021. Donations in her name can be made to a favorite charity. Arrangements are in the care of the Windham Chapel of Dolby Blais & Segee, 434 River Rd., Windham, ME 04062.

WINDHAM-- Jean Donahue Keef, 95, travelled on to her eternal home on September 24th after a brief illness. She was born in Veazie, Maine January 3, 1925 to Helen Berdeen Donahue and Ross Walton Donahue. Her dad was a U.S. Customs Agent on the... View Obituary & Service Information

The family of Jean Donahue Keef created this Life Tributes page to make it easy to share your memories.

WINDHAM-- Jean Donahue Keef, 95, travelled on to her eternal...

Send flowers to the Keef family.