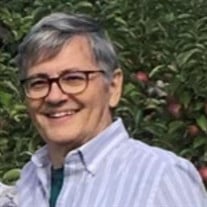 Gorham - Jean “John” Joseph Bousquet Jr., of Gorham, passed away on December 24, 2020 at Gosnell Hospice House of Southern Maine in Scarborough after a three year battle with cancer. He was born in Lewiston on February 18, 1943 to Jean Joseph Bousquet Sr and Rita Samson Bousquet. John graduated from Assumption High School in Worcester, MA followed by one year at Merrimack College, before transferring to the University of Maine where he received his BA in Psychology. After joining the Air Force, John spent four years stationed in Germany. John also enjoyed living in Old Orchard Beach for many years. He worked many years for the Journal Tribune, Sams Curtain Shop in Saco, and 15 years for Sams Club in South Portland working with computers. He was loved by many and will certainly be missed. John will be remembered for being the most kind, loving, generous person who would not hesitate to help anyone he knew in need and would open his home up to those who needed a place to stay. He had a hearty laugh which people enjoyed and will not forget. His love of reading to acquire as much knowledge as possible was his passion. Nothing made him happier than sharing this knowledge with everyone he knew. He excelled in working with computers and making things work. He mostly loved life, traveling and being with friends and family. He is survived by his domestic partner, Rachel Michaud of Gorham and his sisters, Monique Bousquet of Wells, Maine and Michelene Bousquet of France. He is predeceased by his parents. John’s family would like to thank all the staff members that took care of him at the Gosnell Hospice House of Southern Maine. The care they gave John to make him comfortable and pain free was exceptional. Every single staff member was so gentle and caring. They not only brought comfort to him but also to his loved ones. An internment service will be held at 11:00AM Thursday December 31, at St Peter's Cemetery in Lewiston. Family and friends are welcome to accompany John’s family to the cemetery by meeting in the parking lot of the Gorham Chapel of Dolby, Blais, and Segee, 76 State Street, Gorham, at 9:00am. Flowers may be sent to the funeral parlor or you may donate to St. Jude's Children's Research Hospital.

Gorham - Jean &#8220;John&#8221; Joseph Bousquet Jr., of Gorham, passed away on December 24, 2020 at Gosnell Hospice House of Southern Maine in Scarborough after a three year battle with cancer. He was born in Lewiston on February 18, 1943 to... View Obituary & Service Information

The family of Jean "John" Joseph Bousquet Jr. created this Life Tributes page to make it easy to share your memories.

Send flowers to the Bousquet family.