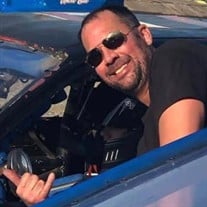 STANDISH – Jason Albert Figucia, 39, passed away unexpectedly on September 23, 2021. He was born in Portland on October, 29, 1981, the son of Jon and Susan (Trepanier) Figucia. Jason graduated from Westbrook High School and went on to serve in the U.S. Navy. He was a proud long-time employee of Sappi and more recently had worked at Heartland Label. He loved to hunt, and fish, he had very fond memories of spending time at camp and going on family deer hunts. He was a die-hard Patriots fan and enjoyed listening to music, he was member of a pit crew at Oxford Plains Raceway, a place he enjoyed. Above all else, Jason will be remembered as a loving father to his three beautiful children. He was hard-working, kind-hearted, and honest, no one ever left the room without a hug and an I love you. He was the protector of his family and had a presence that filled the room. In addition to his father, Jason was pre-deceased by his maternal grandparents, Robert and Irene Trepanier; uncle, Joseph Trepanier; and paternal grandparents, Frank and Rita Figucia. In addition to his mother, he is survived by his daughter, Gianna Figucia; sons, Jonathan and Vito Figucia; loving future wife, Valerie Weatherby; sisters, Erica and Emily Figucia; aunts, Cynthia Cummings, and Diane Bouchard; uncles, Michael Trepanier, Christopher Trepanier, and John Trepanier; and nephew, Eugene. A visitation will be held 10 a.m., Tuesday, September 28, 2021 at St. Hyacinth Church, 268 Brown Street, Westbrook, where a Mass of Christian burial will be held at 11 a.m.

STANDISH &#8211; Jason Albert Figucia, 39, passed away unexpectedly on September 23, 2021. He was born in Portland on October, 29, 1981, the son of Jon and Susan (Trepanier) Figucia. Jason graduated from Westbrook High School and went on... View Obituary & Service Information

The family of Jason Albert Figucia created this Life Tributes page to make it easy to share your memories.

Send flowers to the Figucia family.