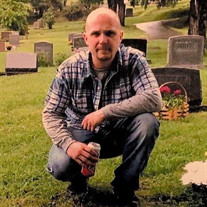 Jason Andrew Davis Sr. passed away unexpectedly on November 22, 2020. He was born in Portland, Maine on August 5, 1984 leaving him 36 years old at the time of his passing. He is the son of Laurie Davis and late Foster L. Davis. Growing up most of his life was spent in Westbrook, ME. When his oldest was born he moved to Arizona and worked there for quite a few years. Jason loved living in the state of Arizona and always spoke of one day going back. He loved to travel and see the different places the world had to offer. Before moving back to Maine in 2015 he graduated High School and then attended Southern Maine Community College studying Culinary Arts. After that he worked as a laborer, then as a bus boy at iHop and recently he just opened his own business: Paint Me 207 LLC. Jason climbed every mountain that he was faced with on his path to success. Everyone around him couldn’t be more proud of how far he’s come in the last few years. He payed off all his old debt and student loans and even brought his credit score up to the 700’s! If there’s one thing that can be said about Jason, it’s that he had the determination to succeed. He had a heart of gold and would do anything for anyone. He was a big “mommas boy”. The love he had for his children was incomparable to anything else. His siblings were his closest friends and his nieces and nephews were just as important. Jason always had a soft spot for family. He is survived by his wife Allisa Davis. His children Billy, Makala, and Jason. He is also survived by his mother Laurie Davis. Siblings; Chrystal and her husband Matthew Prentiss, Amanda Davis, Brent and wife Gena Gross, Brandon Gross, Dereck Gross, Brianna Gross. His nieces and nephews; Dillon, Makenzie, Connor, Ana, Anthony, Gabe, Ava, Isabella, and Mia. His grandfather Alex Greenwald, and grandmother Virginia Davis. As well as lots of cousins, aunts, and uncles. He is predeceased by his father Foster L. Davis, step-father Brent Gross Sr. His paternal grandmother Carla Davis and Foster A. Davis. As well as his maternal grandmother Marilyn Larrabee and grandfather Andrews Larrabee, step-grandparents Mary June Gross and Fredrick W. Gross. His great-grandparents Lydia and Avon Wilcox. His uncle Steven Gross, Steven Davis and aunt Sharon Larrabee. And his cousins Brian Cobb, Bruce Cobb, Steven Davis, and Braxton Cobb. The family would like to thank the staff at Dolby Blais Segee Funeral home for all their help as well as everyone else for all they’ve done during this difficult time.

Jason Andrew Davis Sr. passed away unexpectedly on November 22, 2020. He was born in Portland, Maine on August 5, 1984 leaving him 36 years old at the time of his passing. He is the son of Laurie Davis and late Foster L. Davis. Growing up most... View Obituary & Service Information

The family of Jason Andrew Davis Sr. created this Life Tributes page to make it easy to share your memories.

Send flowers to the Davis family.