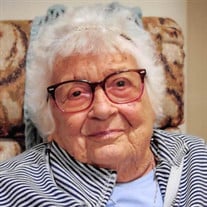 GORHAM - Janet F. Porter passed away Tuesday, October 5, 2021 at age 92 following a brief illness. She was born in Westbrook on August 8, 1929, the daughter of Roland and Ethel Berry. Janet attended Gorham High School and graduated in 1946. She worked for several years at St. Joseph’s College in Standish. She also volunteered many summers at Camp Sunshine on Sebago Lake in Casco, as well as at the Gorham Food Pantry. Janet was very proud of living in the same North Gorham home for 64 years where she raised her family and developed many lifelong friendships. In 2018, she moved to the Gorham House Independent Living where you could almost always find her sitting outside in the sunshine or playing Bingo. She made many new friends while there. Janet was an avid reader and an active member of the North Gorham Guild. For many years she enjoyed her daily coffee with “the girls” at McDonald’s in North Windham. Janet married Frank Porter, Jr. on June 30, 1951. Together they had three children who survive her: Deborah Cairns and husband, Allen of Farmingdale, Michael Porter of Scarborough, and Frank E. Porter,III of Gorham. She was predeceased by her husband; and by siblings, Roland, Frank, Lawrence, and Barbara. She is survived by brother, Paul and his wife, Helen; and sisters-in-law, Lucille Berry and Reta Porter. She is also survived by seven grandchildren: Sarah Grant and her husband, Derrick, Andrew Cairns, Devan Porter, Technical Sargent Emylee Porter, Nicholas Porter, Jenell Porter, and Corporal Alekzander Porter; as well as four great-grandchildren: Addison Stewart, Jack Stewart, Gigi Grant, and Owen Grant. She will be greatly missed by her surviving family members and friends, who will remember her for her kindness, compassion, and thoughtful conversations. The family would like to acknowledge the wonderful care Janet received at the Gorham House and at Maine Medical Center. A graveside service will be held 11:00 a.m., Wednesday, October 13, 2021 at the North Gorham Cemetery on North Gorham Road. Friends are invited to the graveside service as well as to the reception to follow at the United Church of Christ, 4 Standish Neck Road, North Gorham. In lieu of flowers, kindly make donations in Janet’s honor to the United Church of Christ, 4 Standish Neck Road, North Gorham, 04038, the North Gorham Public Library, 2 Standish Neck Road, North Gorham, 04038, or the Gorham Food Pantry, P.O. Box 547, Gorham, ME 04038.

GORHAM - Janet F. Porter passed away Tuesday, October 5, 2021 at age 92 following a brief illness. She was born in Westbrook on August 8, 1929, the daughter of Roland and Ethel Berry. Janet attended Gorham High School and graduated in 1946.... View Obituary & Service Information

The family of Janet F. Porter created this Life Tributes page to make it easy to share your memories.

Send flowers to the Porter family.