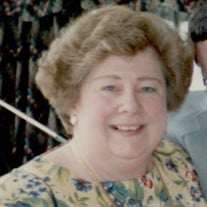 GORHAM - Jane Plummer Murphy was born in Portland Maine in 1947, the daughter of Fred S. and Etta (Spiller) Plummer. Jane grew up in Westbrook with her parents and four siblings and attended the United Methodist Church. After graduating from Westbrook High School in 1965, Jane attended Gorham State College, which is now known as the University of Southern Maine. Following her graduation, she taught school in Ft. Lauderdale, Florida. In September 1974 after having returned to Maine and moving to Massachusetts, she married James G. Murphy, Jr. She resided in Plymouth, MA for 24 years with her loving husband. Jane worked with her husband at his businesses Payroll Management Corporation and JGM Jr./Tax and Accounting Business. Her husband James G. Murphy, Jr. passed away in 1998. Jane was a dedicated member of the Plymouth United Methodist Church and was very active in Christian education. Over the years, she went on several mission trips to flood areas and to Cuba. In 2002 after selling the businesses she returned to Maine to live near her family. While in Maine she enjoyed many family gatherings throughout the years. Jane loved helping with the care of young children in the family. She enjoyed attending their ball games and band concerts. She also cherished gatherings of her high school classmates and her college classmates who were lifelong friends. Jane is predeceased by her parents, Fred S. and Etta (Spiller) Plummer, husband, James G. Murphy Jr., and sister, Linda Plummer Newell. She is survived by brothers, Clifford A. Plummer of Casco, Mark S. Plummer of Portland, and sister, Susan P. MacDonald of Gorham. She also leaves many nieces, nephews, and their children Jane also leaves James Murphy's brothers, sisters, nieces and nephews; whom she called her "second family". A celebration of life will be private and she will be buried in Massachusetts with her husband, Jim. In lieu of flowers please make a donation to your favorite charity in Jane’s memory.

GORHAM - Jane Plummer Murphy was born in Portland Maine in 1947, the daughter of Fred S. and Etta (Spiller) Plummer. Jane grew up in Westbrook with her parents and four siblings and attended the United Methodist Church. After graduating... View Obituary & Service Information

The family of Jane P. Murphy created this Life Tributes page to make it easy to share your memories.

GORHAM - Jane Plummer Murphy was born in Portland Maine in 1947,...

Send flowers to the Murphy family.