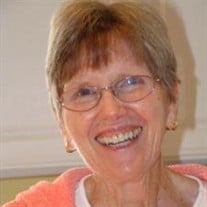 Jane Stansfield Mosher passed away at Gorham House on 4 March 2021. She was 82. Jane was born on 5 April 1938 in Farmington, Maine, to the late Faye Mitchell Stansfield and Harry Linwood Stansfield. Jane grew up in Wilton, where she graduated from Wilton Academy in 1956. She was a freshman education major at the University of Maine when, on a blind date, she met Charlie Mosher, a chemical engineering student in his senior year at Orono. Jane and Charlie married on 18 October 1958. Jane was first and foremost a beloved mom to five children, all of whom were born in Millinocket, where Dad worked as a chemical engineer for Great Northern Paper. Mom was an extraordinarily good cook and baker – indeed three batches of toll house cookies rarely lasted more than a couple of hours when neighborhood kids were over. And to our yard they flocked. Mom was the one whose overloaded station wagon hauled the neighborhood to Jerry Pond, Meckauer Park, the grocery store, and especially to the malls in Connecticut. Mom fixed scrapes, bruises, and various aches and pains, held sobbing children, and went to virtually every sporting event in which her children played. She could catch and throw baseballs and footballs with considerable skill. Actually, she did everything well when she put her mind to it. Like her father, mom didn’t suffer fools, and she was fond of saying, “If you embarrass me [in public], I’ll break your arms and legs!” Mom had an unwavering faith in God, served in multiple capacities in the Congregational Churches in Millinocket, Bethel, CT, and Gorham, ME. Mom drove for meals on wheels, visited shut-ins, served at the Women’s Day Shelter in Atlanta, and was a member of the Gorham Cosmopolitan Club. Jane was predeceased by her husband, Charlie of nearly 62 years, and her brother John “Jack” Stansfield. She is survived by her children John Mosher and wife Liz of Bath, Leigh Ivers and her husband John of Auburn, Chad Mosher and his husband Walter of Cape Cod, Faye Connolly and her husband Patrick of Windham, and Leslie Thibault and her husband Tom of Saco, as well as eight grandchildren and two great grandchildren. Mom will be missed dearly.

Jane Stansfield Mosher passed away at Gorham House on 4 March 2021. She was 82. Jane was born on 5 April 1938 in Farmington, Maine, to the late Faye Mitchell Stansfield and Harry Linwood Stansfield. Jane grew up in Wilton, where she graduated... View Obituary & Service Information

The family of Jane Stansfield Mosher created this Life Tributes page to make it easy to share your memories.

Jane Stansfield Mosher passed away at Gorham House on 4 March...

Send flowers to the Mosher family.