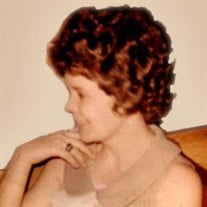 WESTBROOK - Jane M. Mapili, 79, died suddenly in her home among loved ones, after a battle with cancer, on February 7, 2022. “Janie,” as her closest friends called her, was born November 30, 1942 in Portland, the oldest of three children to the late Benjamin and Pauline Roy. She lived some of her earlier years with her paternal grandmother Annie Roy until moving back permanently with her mother on Cherry Street in Portland, and then relocating to the corner of Congress and Hemlock when their home was demolished to make room for the coming interstate highway system. She received a GED and continued courses in higher education in various parts of the country as a military wife. Military life had her living abroad for nearly two decades before finally settling in Westbrook in 1986. Jane was an employee at IDEXX since its first couple years in existence, and remained so for over 20 years. There she made countless friends, many of whom she stayed in touch with. She often spoke of missing her life at work. An understated and quietly observant person to strangers, she was gifted with a quick wit, sense of humor and talents that often surprised those getting to know her. Among many talents she was an artist with a gift for drawing and a skill for ceramics. She always sought self-improvement and continued education, which she pursued almost in secret, including many subjects such as sociology and psychology. She took courses in Tagalog during her years in Hawaii, surprising many in conversations who had no idea. She loved traveling, gambling, and never stopped her obsession with forensic type TV shows since before the days of Quincy all the way up to Law & Order, as well as game shows. Though the people closest to her knew she was gifted to be a detective, she once confessed she had always wanted to be a comedian. Her loved ones would say she was one already. Jane was also a lover of music, especially 50’s Rock-n-Roll, 60’s/ 70’s Soul, and later Country. She often recalled watching the first Elvis Presley movie at the theater and seeing James Brown live, both in Portland during the 50’s & 60’s. Jane had a handful of very close friends from that time who remained so until the end. Having had quite a unique life, she was known for having the most outrageous and fascinating stories that earned her much love, respect and interest among everyone, young and old alike. She was predeceased by her parents as well as her sister, Patricia Anne Roy. She is survived by her brother Philip John Roy, her son Roger Mapili, and four nieces. Visiting Hours will be at Dolby, Blais and Segee Funeral Home, 35 Church Street, Westbrook, from 6pm to 8pm on Tuesday, February 22. Funeral will be privately held for just immediate family. Donations in Jane’s name can be made to Animal Refuge League in Westbrook.

The family of Jane M. Mapili created this Life Tributes page to make it easy to share your memories.

Send flowers to the Mapili family.