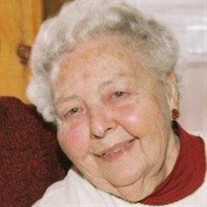 Jane H. Lunt, 94, died on December 9, 2020. Born in Portland, on March 13, 1926, the daughter of Clifford S. Ohlund and Dorothy (Dunbar) Ohlund Burns. Growing up in the Stroudwater Village area, Jane was a member of the Stroudwater Baptist Church and the Stroudwater Grange. She attended Portland schools graduating from Deering High School in 1944. She also worked outside of the home at Fairchild Semiconductor, Canal Bank retiring from Raymond School Dept after 20 years as secretary-bookkeeper. Following retirement, she enjoyed her time as a volunteer at the Tate House in Stroudwater. Jane provided a loving and welcoming home to all, leaving us with wonderful memories of family & friend gatherings, Sunday dinners and holiday events! One of Jane’s defining attributes was being the right side of her mirror twin, Joan. Their bond was extraordinary; always looked at and referred to as the twins, which was perfectly fine with them. Mom, we find comfort knowing you have reunited with Aunt Joan and feel whole again! Jane is survived by her children, Lorene Black and husband, Joseph & family; Stephen Lunt and Cheryl Washburn & family; Susan Simonson and husband, Samuel & family; Jeffrey Lunt and wife, Jayne & family. She also leaves behind her brother, Tom Ohlund; half-siblings, Thurston Burns and Lola True and several nieces. Special mention goes to Dennis Racine, who joined our family and became her third son. In addition to her parents, Jane is predeceased by her husband of 71 years, Leland; twin sister Joan Sloan; and half-brother, Robert Burns. The family wishes to extend their sincerest gratitude to the staff at Casco Inn and Residential Care Facility. During these tough times of pandemic isolation, the wonderful care and love you provided our mother is greatly appreciated. A graveside service will be held next summer at Brooklawn Memorial Park, 2002 Congress St., Portland. Arrangements by the Windham Chapel of Dolby, Blais & Segee. Donations in Jane’s memory may be made to: The Iris Network, c/o Development, 189 Park Avenue, Portland, ME 04102 or The Tate House Museum, 1267 Westbrook Street, Portland, ME 04102.67 Westbrook Street

Jane H. Lunt, 94, died on December 9, 2020. Born in Portland, on March 13, 1926, the daughter of Clifford S. Ohlund and Dorothy (Dunbar) Ohlund Burns. Growing up in the Stroudwater Village area, Jane was a member of the Stroudwater Baptist... View Obituary & Service Information

The family of Jane H. Lunt created this Life Tributes page to make it easy to share your memories.

Send flowers to the Lunt family.