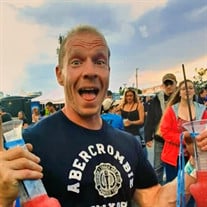 POLAND – Jamie Richard West, 44, of Poland passed away unexpectedly on July 7, 2021. He was born in Portland on June 2, 1977 to Richard "Dickey" Alan West and Charlene "Wendy" Louise Smith West. Jamie became very close to Rabbi Gary Barenson and believed in many of the teachings of the Jewish religion. Rabbi became a dear and trusted friend and confidant, who allowed Jamie and Tracy the privilege of marrying them and allowing their love to transcend all boundaries and obstacles. Jamie enjoyed having fun, and making every seemingly boring and mundane task exciting and entertaining. He always had a smile and a laugh, and everything in life was supposed to be a party and fun, even normal everyday chores. Jamie loved nothing more than to spend time with his daughter, wife, family and friends laughing, joking and having an all-around party. Jamie's hobbies included raising and preserving the American Pit-bull Terrier. Going to ADBA sanctioned dog shows. One of his proudest moments were when his dog Clovis took third place at the World Nationals Dog Show in North Carolina along with many of his other dogs placing in their age classes at other local shows in New Jersey and Massachusetts. Jamie was an active gardener and with his wife they built West's Family Farm a small business which was quickly becoming very popular. His wife hopes to continue his legacy and memory by continuing the business in due time. Jamie is predeceased by his parents and his brother, Jason Alan West. He leaves behind his beloved wife, Tracy Lynn Mathias West, Esq., and his adoring daughter, Ella Aurora West, whom he loved to the moon, to the stars, to the sunshine, to the clouds, to the heavens, and to the whole wide world, Always and Forever. He also leaves behind his adoring sister Liberty Ann West, along with a large extended family; The West's/Clark's on his father's side originally of Portland and the Smith's from his mother's side originally of Naples, along with a vast number of extremely close friends from all walks of life to which he considered his family. Jamie's memory will live on forever with all the lives he touched and changed and he will never be forgotten. Jamie's wife and daughter will love him Always and Forever, death will not part them. Visitation will be held from 5:00 - 7:00PM Friday July 16, at the Windham Chapel of Dolby, Blais & Segee 434 River Road, Windham. A period of sharing memories of Jamie will follow visitation at 7:00PM.

The family of Jamie R. West created this Life Tributes page to make it easy to share your memories.

Send flowers to the West family.