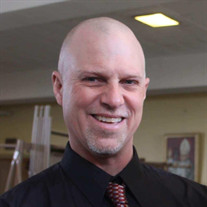 James M. “Jamie” Wentworth of Windham, and formerly of Verona Island, Maine, passed away unexpectedly at home Monday, July 6, 2020. Jamie was born April 3, 1966, the son of the late Charles and Barbara (Wight) Wentworth. Jamie is survived by his wife of 33 years, Sue Gray Wentworth, and a son, Michael James, age 7. Jamie is also survived by four siblings, Susan (Wentworth) Curtis of Portland, Charles, Jr. and wife, Brigid of Verona Island, John and wife, Jane of Pownal, and Daniel and wife, Stormi of Verona Island. He is also survived by a sister-in-law, Sami Gray and husband, James Bates of Van Cleave, MS; his aunt, Rachel Snow; and many cousins, nieces and nephews. Jamie graduated from Bucksport High School in 1984, where he played varsity golf. He was a certified ASA and Eastern Maine Board softball umpire and worked the 2017 Eastern Maine High School Softball Tournament, being assigned to a regional final. He was an avid Boston sports fan, and a skilled sportsman with a love for hunting and fishing. He was employed for 27 years at the paper mill in Bucksport. In 2017 he moved his family to Escanaba, Michigan to assume a supervisory position at Verso’s Escanaba mill. He had returned to Maine to start a new chapter in his family’s life when he passed away. Those that knew Jamie loved him dearly and he will be remembered as the friendly, outgoing man he was. He will be deeply missed by his special nephew, Robbie Curtis and wife, Melanie; his best friend, John Oak and wife, Debbie; his hunting and fishing buds, Corey Bires and Scott Hunt; as well as many relatives and friends. His older brother Dan, whom he was very close to, will miss him always. He is back in the arms of his parents, in-laws, and God-son, Andrew James Wentworth. Due to Covid19 the celebration of Jamie’s life will be private. In lieu of flowers, contributions may be made to a college fund, payable to Michael Wentworth and sent care of Seaboard Federal Credit Union, PO Box G, Bucksport, ME 04416.

The family of James M. Wentworth created this Life Tributes page to make it easy to share your memories.

James M. “Jamie” Wentworth of Windham, and formerly of Verona...

Send flowers to the Wentworth family.