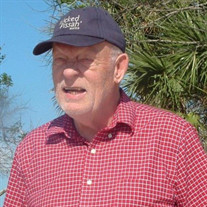 James Elwood Stevens, 81 GORHAM-- James Elwood Stevens was born May 29th, 1939 and passed May 31st, 2020, at the Seaside Health and Rehabilitation Center in Portland, Maine. He grew up in Gorham, Maine, the son of Elwood “Ding” Stevens and Erna Leavitt Stevens. He graduated from Gorham High School in 1957. He loved the forests of Maine, and the routines of small town life---be it in Sebago or Moultonborough, New Hampshire or Newark, Vermont. However, it was the adventures of travel and discovery that defined him. He was a man of dreams and the perseverance to pursue those dreams, no matter the distance, no matter the time involved. Shortly after graduating from The University of Maine, at Orono, in 1961, he and his new bride, Charlotte Miner Stevens, hit the road, making the journey to a new life in Alaska, the wild frontier. Adventure and adversity often came hand in hand, but he stuck with it---whether he was explaining equations as a high school math teacher or managing a branch bank, building a home on the side of the mountain, in Eagle River, Alaska or a log cabin, in the woodlands of Sebago…he forged ahead. His fondest memories included family outings---blueberry and fiddlehead picking, and cross-country skiing, as well as more solitary treks hunting sheep in the mountains of Alaska. His spirit of adventure and love of the natural world lives on in his children and grandchildren. He is survived by his younger brother, Jeffrey Stevens and his wife Judy of Gorham, his sister-in-law, Patricia “Tweet” Stevens; his three daughters, Amanda Jane “AJ” Milligan and her husband Dwight, Gwendolyn Eunice Van Dine and her husband Justin, and Heidi Mari Freeman and her husband Justin; his four grandchildren, Forest and Cody Van Dine, and Iris and Sage Freeman; his nephews Christopher Stevens, Bobby Stevens, Lance Stevens, and Greg Stevens, and his niece, Debby Stevens. He is predeceased by his brothers Bruce and Robert Stevens. In his later years, he fell in love with the Space Coast of Florida, where he spent winters in a retirement community near Amanda in Mims, Florida. He spent many mornings sharing coffee and walking her garden paths, listening to his beloved cardinals, and even tending to his own favorite flowers—amaryllis and gladiolas. He was delighted to discover Florida’s gentle giants, the manatees, and those blue eyes saw many shuttle and rocket launches from the shores of Titusville. It seemed a fitting tribute to Jim that the Saturday before his passing, America watched our astronauts, aboard Dragon, return to space, once again. A graveside service will be held in the near future with a date and time to be announced at Dow’s Corner Cemetery in Standish. Arrangements are in the care of the Gorham Chapel of Dolby Blais & Segee, 76 State Street, Gorham, ME 04038. To express condolences or participate in his online tribute, please visit www.DolbyBlaisSegee.com.

The family of James Elwood Stevens created this Life Tributes page to make it easy to share your memories.