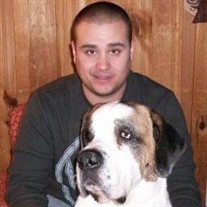 GORHAM—James Nelson Rollins Jr., 41, passed away unexpectedly of natural causes on November 16, 2020 at his home. He was born July 14, 1979, a son of James Rollins Sr. and Lori Tatarczuk. Jim grew up in Westbrook and was a gifted athlete throughout his school years playing football, hockey, and baseball. After high school, Jim became a father to his sons, Noah, and twin boys Tyler and Isaac. His sons were his pride and joy; he beamed while watching them on the football field and enjoyed being an assistant coach to their football team while in middle school. Jim was self-employed and owned his own company, Strictly Business Cleaning Service, a commercial cleaning service. He was most in his element while cruising on his Harley Davidson. He enjoyed fishing and kayaking on the Presumpscot river behind his house, cookouts on the grill, and having fires in the backyard. He adored his German Shepherds, Bishop and Harley. Above all, family was the most important part of Jim’s life; he loved big family gatherings and just simply being together. Jim will be remembered for being the life of a party, always greeting everyone with his kind smile, and generous heart. He is survived by his sons, Noah Rollins, Tyler Rollins, and Isaac Rollins; mother and step-father, Lori and Peter St. Onge; sister, Nicole Mizner and her husband Scott; nephews, Trevor and Colby Mizner; paternal grandfather, Tommy Rollins; and many aunts, uncles and cousins. He was predeceased by his father, James Rollins Sr., paternal grandmother, Jean Thayer, maternal grandparents, Faye and Anthony Tatarczuk; and his uncle Stephen Tatarczuk and aunt Lisa Tatarczuk. A service will be held in the spring. In lieu of flowers, memorial donations in Jim’s name may be made to: Courage House, C/O Al Garcia, 24 School Street, Gorham, ME 04038. Arrangements are in the care of the Windham Chapel of Dolby Blais & Segee, 434 River Rd., Windham, ME 04062.

GORHAM&#8212;James Nelson Rollins Jr., 41, passed away unexpectedly of natural causes on November 16, 2020 at his home. He was born July 14, 1979, a son of James Rollins Sr. and Lori Tatarczuk. Jim grew up in Westbrook and was a gifted athlete... View Obituary & Service Information

The family of James Nelson Rollins Jr. created this Life Tributes page to make it easy to share your memories.

Send flowers to the Rollins family.