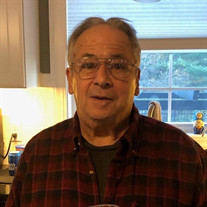 JAMES ARTHUR “JIM” LEWIS RAYMOND-James Arthur “Jim” Lewis, 81, died on November 12, 2021 after a valiant battle with a sudden illness. He was born on October 31,1940, in Brooklyn, NY, the son of Harry Fielding and Gertrude (Schwartz) Lewis. Jim’s fondest childhood memories began when his family moved to Clockville, NY. He graduated from Canastota Central High School, Class of 1958. He proudly served in the U.S. Army in Greenland, returning to Clockville to attend college at SUNY Morrisville, and graduated with an associate degree in agricultural engineering. In 1969, Jim moved his young family to Raymond, Maine, when Xerox Corp. offered him a position here. After he retired from Xerox in 1987 he continued to work, eventually landing at Lowe’s, where he proudly wore his camouflage veteran’s vest. Jim never met a stranger, and could strike up a conversation with anyone. He especially enjoyed chatting with fellow veterans. Jim was a founding member of St. Ann’s Episcopal Church in Windham and served in many capacities throughout the years. He had a heart for helping others, donating over 20 gallons of blood to the American Red Cross and serving hundreds of people at the St. Luke’s Soup Kitchen. He made a difference in countless people’s lives. He had an indomitable spirit and was a fighter, having survived a heart attack, a quintuple bypass heart surgery, falling off his tractor and rolling down the hill with it, and also beat cancer three times. Jim loved to watch the sunrise as he drank his morning coffee on the deck overlooking Crescent Lake. His work ethic was strong, but he also enjoyed relaxing with family and friends, sitting around a table playing games, shooting the “crap”, and laughing at a shared joke. He loved his family and was ever grateful for the many blessings in his life. He is survived by his beloved wife of 35 years, Lynn Marie (Bevan) Lewis, his five children, Melissa Anne (Lewis) McDonald, James Russell Lewis (Lisa), Katherine Small Leclerc (Michael), Michelle Small Kinney (Jeff), Tracie Small Everett (Chad), younger brother Russell Gordon Lewis (Joscelyn), and 13 grandchildren: Alexander, Gabriella, Hunter, and Shannon McDonald, Brett Lewis, Andrea and Corey Brown, Brianna and Jared Leclerc, Nathan and Benjamin Kinney, and Taylor and Brooke Everett, and many nieces and nephews. In addition to his parents, he was preceded in death by his older brother, Daniel William Lewis (Rosalie). Jim's family wishes to thank the medical staff at Stephens Memorial Hospital who took such good care of him, and to the many friends who reached out to offer support and prayers during this difficult time. A private Interment of Ashes will be held at St. Ann’s memorial garden, officiated by Rev. Timothy Higgins. A Celebration of Life will be held in the spring. In lieu of flowers, a donation in Jim’s memory can be sent to St. Ann’s Episcopal Church, PO Box 911, Windham, ME 04062.

The family of James Arthur "Jim" Lewis created this Life Tributes page to make it easy to share your memories.

Send flowers to the Lewis family.