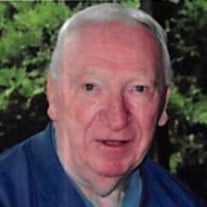 CAPE ELIZABETH - James W. Hayes, 93, passed away on April 6, 2021 at Maine Medical Center. James was born in Portland on October 24, 1927 the first child of Karl and Elizabeth (O’Donnell) Hayes. He grew up on Cedar Street and graduated from Cheverus High School in 1947. He enlisted in the U.S. Naval Reserve in the late 1940’s and until the early 1950’s. He worked for the American Can Co. in Portland and Massachusetts for 45 years. He met Dorothy Moulton in 1949 and they were married on June 10, 1950, and remained married for 66 years until her death in 2016. Together they raised 5 children. He was a member of St. Pius X Church. He enjoyed traveling and made several driving trips to Florida in his retirement years. He had a great love for driving and going on road trips. Dad was often seen at McDonald’s. Dad was always a family man who would do anything for his sons and daughters. In his later years he enjoyed playing with his great-grandchildren and his daughter’s cats. He also enjoyed going out with family for fish chowder and ice cream. In addition to his parents, James was predeceased by his son, Michael; and daughter, Anne. He is survived by his sons, Gregory and his wife, Patti of Hartsville, SC, and Timothy and his wife, Dulcie of Scarborough; daughter, Natalie Baltos and husband, Jon of Old Orchard; brother, Paul Hayes and wife, Deanna of Lakeville, MA; 11 grandchildren; and 9 great-grandchildren. Relatives and friends are invited to a visitation, 9 to 10 a.m., Monday, April 12, 2021 at the Westbrook Chapel of Dolby, Blais & Segee, 35 Church Street, Westbrook. A Mass of Christian Burial will be held 11 a.m., Monday, April 12, 2021 at St. Pius X Chruch, 492 Ocean Ave, Portland. Interment will follow at Calvary Cemetery, South Portland.

CAPE ELIZABETH - James W. Hayes, 93, passed away on April 6, 2021 at Maine Medical Center. James was born in Portland on October 24, 1927 the first child of Karl and Elizabeth (O&#8217;Donnell) Hayes. He grew up on Cedar Street and graduated... View Obituary & Service Information

The family of James W. Hayes created this Life Tributes page to make it easy to share your memories.

Send flowers to the Hayes family.