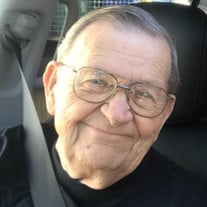 WINDHAM—James Foden Hanson Sr., 94, passed away October 22, 2020 at Springbrook Center in Westbrook. He was born October 17, 1926, a son of Harry G. Hanson Sr. and Mildred (Cushing) Hanson. He grew up in Portland and was a graduate of Deering High School. Following graduation, he enlisted in the United States Navy where he was a minesweeper while stationed on the USS Change AM-159. Upon his honorable discharge, he remained in the Navy Reserves for several years. After returning home from the military, James married Virginia Elizabeth “Betty” Schofield. Following in his father’s footsteps, James became a Pharmacist. Working alongside his brothers (who were also Pharmacists), James owned and operated Hanson Drugstore on Congress Street in Portland where he practiced for 50 years. His career path led him to become a Pharmacy Drug Inspector for the State of Maine along with other State and Federal agents. In addition to being a registered Pharmacist, he was also registered in Apothecary. He was deeply regarded in a professional sense, enough so to teach at the Dale Carnegie School in Portland. James had many passions in life; he adored animals, leading him to have many influences with his expertise. He taught obedience training, began a dog tracking club, and was one of two AKC tracking judges in the state of Maine. James was proud to introduce pet therapy to Maine Medical Center and brought the first dog to the hospital to visit patients and children. Through the years, the Hanson residence was home to countless beloved pets. James was proud to be on the Board of Directors for the Animal Refuge League of Greater Portland for 20 years. In addition to his accomplishments as a Pharmacist and animal advocate, James was also a Mason with Hiram Lodge #180 A.F & A.M. in South Portland and was a lifetime Kora Shriner. James enjoyed his service to others, and never stopped learning. He was exceptionally intelligent, and even attended NASA Astronaut Camp while in his 70’s. Some of James’ favorite pastimes include square dancing with his wife, Betty; they made their own outfits and organized square dancing events. All distinctions aside, James was a family man. He adored his grandchildren, nicknaming his beloved Jennifer “Eagle” and Abigail “Butterfly”. The epitome of a true gentleman of the greatest generation, his love and devotion to his wife and family was unparallel and his legacy lives on in all of them. He is survived by three children, James F. Hanson Jr., Nancy Hanson Wilburn, Arthur Hanson, and daughter in law Greta Hanson; grandchildren, Jennifer Hanson and her partner Aaron Vezeau, Abigail Hanson, Jessica Ireland, Dalia Hanson, Scott Wilburn and his wife Lori, Eddie Wilburn and his wife Kelly; many great grandchildren; siblings, Millard “Bud” Hanson and his wife Georgia, and Nancy Hanson Snyder; family, Peter, Peggy and Molly Mikkonen; dear friends, Robert Miele, Jim and Nancy O’Neil and dogs, Lyndon Brett, Osip, and Lucas. He was predeceased by his wife; brothers, Harry G. Hanson Jr. and his wife June, and Ralph Hanson and his wife Lorraine; and brother in law Bruce Snyder. A graveside service will be held on Saturday, October 31, 2020 at 11am at Arlington Cemetery, Rt. 302, Windham. In lieu of flowers, memorial contributions in James’ name may be made to Animal Refuge League of Greater Portland, PO Box 336, Westbrook, ME 04098, https://arlgp.org/, or Shriners Hospitals for Children, 2900 Rocky Point Dr., Tampa, FL 33607, www.shrinershosptialsforchildren.org. Arrangements are in the care of the Windham Chapel of Dolby Blais & Segee, 434 River Rd., Windham, ME 04062.

WINDHAM&#8212;James Foden Hanson Sr., 94, passed away October 22, 2020 at Springbrook Center in Westbrook. He was born October 17, 1926, a son of Harry G. Hanson Sr. and Mildred (Cushing) Hanson. He grew up in Portland and was a graduate of... View Obituary & Service Information

The family of James Foden Hanson Sr. created this Life Tributes page to make it easy to share your memories.

Send flowers to the Hanson family.