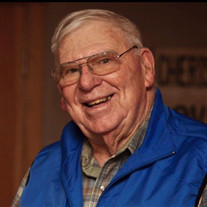 NAPLES-- James Neithercut Duffus, age 92, son of William A. and Jean N. Duffus, was born March 12, 1928, in Saco, Maine, and passed away peacefully on July 23 in Washington State. He attended Thornton Academy, then was employed at The Cascades Restaurant where he met Louisa Mae Bacon, whom he married in 1947. Jim became a meter reader, and later a first class lineman for Central Maine Power Company. In 1957 the family relocated to the Panama Canal Zone in order to join Jim’s parents there where Jim acquired employment as a civilian electrician for the US Navy. In 1961 he transferred to the Panama Canal Company, overseeing the maintenance of the essential navigation lights along the canal’s banks. His career changed once more when he became the PCC Electrical Division’s supervisor for the maintenance of the center district’s high voltage transmission lines which span the isthmus adjacent to the railroad. Upon retiring in early 1982, Jim and Louisa returned to what had been their summer home on Long Lake in Naples, ME. Jim’s retirement job was driving a Lakes Region School District bus. Missing their immediate family, they journeyed permanently to North Bonneville, WA, in 1986, where Jim continued his bus driving career for the Stevenson-Carson School District. An avid golfer, Jim played the links whenever he could, and had a legendary love of cribbage, often playing before lunch was served at the Senior Center in North Bonneville. He was an active member of the North Bonneville Community Church. While in the Canal Zone he loved being in the Motor Patrol of Abou Saad Temple, a Mason, and serving on the board of the Gamboa Union Church. After assembling a fiberglass kit boat from Luger Industries, much time was spent fishing in the Bay of Panama and the fresh waters of Gatun Lake, where the family enjoyed water skiing, most often right after he got off work! Jim was predeceased by his sister Elizabeth, brother William A., wife Louisa in 2001, son-in-law Michael Plucker, and wife Sue Bowers in 2019. He is survived by daughter Inez Plucker of Plainfield IN, sons William J. Duffus (wife Elaine) of Gray, ME, and James B. Duffus (wife Clover) of North Bonneville, WA, plus grandchildren Nellie Arnett (husband Darrell) of Plainfield, William Plucker (wife Katie) of Eugene, OR, Emily Sayle (husband Robert) of Norcross, GA, Louise Artman (husband Christopher) of Berwick, PA, Joshua Duffus (wife Rachel) of Cook, WA, Christina Curry (husband Jason) of Tacoma, WA, and great grandchildren Jacob, Peter and Ruby Arnett, Robert I. and Elaine Anne Sayle, Isaac and Emma Artman, Miles, Jackson, and William J. Duffus, and Clover and Geneva Curry. The family earnestly thanks the Parkhurst and Rock Cove assisted living facilities’s staffs for their dedicated loving care for Jim. Internment will be at the Ladd - Mercer cemetery in Mercer, Maine on August 8, 2020. In lieu of flowers, donations can be made to the North Bonneville Community Church (PO Box 190, North Bonneville, WA 98639). Memorial services in WA and ME will be held at later dates. Arrangements are in the care of the Windham Chapel of Dolby Blais & Segee, 434 River Rd., Windham, ME 04062.

NAPLES-- James Neithercut Duffus, age 92, son of William A. and Jean N. Duffus, was born March 12, 1928, in Saco, Maine, and passed away peacefully on July 23 in Washington State. He attended Thornton Academy, then was employed at The Cascades... View Obituary & Service Information

The family of James Neithercut Duffus created this Life Tributes page to make it easy to share your memories.

Send flowers to the Duffus family.