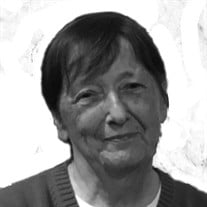 Jacqueline M. Viljanen, 80, of Standish, passed away peacefully surrounded by her children on June 8, 2020. Jacqueline was born on February 28, 1940 to parents Robert and Ella Croughwell in Pittsfield, MA. Jackie graduated from St. Joseph High School in Pittsfield, MA in 1957. After high school she attended Elms College in Chicopee, MA graduating cum laude in 1961 with her bachelor’s degree, majoring in chemistry with a minor in math and education. On May 23, 1964 Jackie married Kurt Viljanen of Dragsfjärd, Finland and raised three children together. In her working years, Jacqueline worked as an analytical chemist at P.J. Schweitzer in Lee, MA where she met her husband Kurt, who was also a chemist. After marrying, Jackie and her husband moved to Finland where she was a research chemist at Tervakoski Paper in Tervakoski, Finland and editor/proof reader for English language sales brochures in Finland. After all their children were born they moved back to the US, where she later became a math teacher at Milford Middle School; and an adult education teacher for math and technical writing, in New Hampshire. Jackie enjoyed spending most all of her time volunteering at many places in New Hampshire and Maine. Recently she was an active member of St. Anne’s Parish in Gorham, ME. She was also active in the Church Bereavement Committee, prison ministry work, and was a Eucharistic Minister at The Inn at Village Square, the Gorham House and the Scarborough Maine Veteran’s Home. She regularly donated items to the Amistad House whose residents often referred to her as the “pie lady’ who baked and gathered up to 50 pies to Amistad House during Thanksgiving each year. Jackie is survived by her son, Pat; daughter, Kristina and husband Matt Sabasteanski; grandchildren, Kurt, Alek and Larson; Kristian, Teegan; Boden and Finley; sister Jill Simonds; niece Danielle and husband Tom O’Connor and son Tyler, as well as all the Viljanen family in Finland. She is predeceased by her parents; her husband, Kurt; her sister, Roberta Brown; her son, Erik Viljanen and her niece Jennifer Brown. Jackie will be remembered for her selfless and giving personality, her strong independence and family connections, living simply and content, and for her Swedish Bulla on Christmas morning. She lived by one of her favorite quotes, “Do what they think you can’t do”. A Memorial Mass will be held at St. Anne’s in Gorham with a date and time to be announced later this summer. In lieu of flowers, please consider donating to Amistad - 66 State St # 2, Portland, ME 04101, or St. Anne’s Catholic Church -299 Main St, Gorham, ME 04038 -

The family of Jacqueline M. Viljanen created this Life Tributes page to make it easy to share your memories.

Send flowers to the Viljanen family.