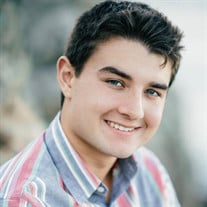 GORHAM-- Jacob Patrick Dupuis, 19, of Gorham, passed away on September 24 as the result of a tragic automobile accident while working in Arundel. He was born on February 10, 2001 in Portland, the son of Tom and Leslie (Wright) Dupuis. He graduated from Gorham High School in 2019 and was a sophomore at the University of Vermont. He had chosen to study remotely from home this semester due to Covid but looked forward to returning to Burlington soon. Growing up in Gorham, Jake had an idyllic childhood. Summers were filled with backyard playdates in the pool, trips to the beach, an annual camping trip to Bar Harbor, and a week on Sebago Lake. Winter days were spent on the slopes. In elementary school, Jake lived in England with his family for two years. During that time, he traveled all over Europe including trips to Italy, France, Greece, and his favorite, the Swiss Alps - a place he returned to with his family and friends for a senior trip. He was an honor roll student who played soccer, was a two-year captain on the lacrosse team, and a partner for the newly formed Unified basketball team. Jake was a bit of a daredevil which came through in his love for snowboarding and skateboarding. Joining the snowboard team at UVM brought him great joy and he reveled in weekend trips to Sugarbush and Jay Peak. When the pandemic forced him home early, he switched gears, built a quarter pipe for his skateboard, and honed his skills in preparation for next winter. It was wonderful to watch him become an independent and capable adult. He worked through the bumps he encountered at school and elsewhere, resolving them perfectly on his own despite our desire to intervene. He had strong opinions, convictions, and was very well spoken. He would debate you until, more often than not, you relented. He was kind and caring, loved good music, savored a great meal, and was perfecting his culinary talents. He had a beautiful smile and a mischievous smirk. He always offered up hugs when leaving and never hesitated to say I love you. He treasured his family, his friends, his coworkers, and his dog Maggie. He is loved beyond words and will be forever missed. He is survived by his parents and his sister, Kate, all of Gorham; paternal grandparents, Tom and Bernadine Dupuis of Limerick; maternal grandparents, Richard and Donna Wright of Bangor; aunts and uncles: Rick Wright of Brewer; Ray and Sophie Wright of Cumberland; Charlie and Elena Dupuis of Saco; Melanie DiLorenzo of Saco; Jessica and Robert Ireton-Hewitt of Stuart, FL; Heather Dupuis of Gorham; Nick and Charlotte Wilson of Saco and Paul Farley of Gorham; and many cousins. There will be a private celebration of life. A visitation will take place on Saturday, October 3, from 1 p.m. to 4 p.m. at the residence of Ted Carter & Greg Bembry, 99 Cousins Road, Buxton, ME, 04093. Attendees are asked to wear masks and follow social distancing guidelines. To honor Jake’s vibrant spirit, colored attire is suggested. In lieu of flowers, please consider making a donation to a scholarship fund in Jacob’s memory. Checks can be sent and made payable to: Gorham High School, c/o Jake P. Dupuis Memorial Scholarship, 41 Morrill Avenue, Gorham, ME 04038, Attn: Barbara Quinn-Gagnon. In the memo line, please note Jake P. Dupuis Memorial Scholarship. Donations can also be made through Venmo @JakePDupuisMemorialScholarship. Arrangements are being handled by Gorham Chapel of Dolby Blais & Segee, 76 State St., Gorham, ME 04038.

GORHAM-- Jacob Patrick Dupuis, 19, of Gorham, passed away on September 24 as the result of a tragic automobile accident while working in Arundel. He was born on February 10, 2001 in Portland, the son of Tom and Leslie (Wright) Dupuis. He graduated... View Obituary & Service Information

The family of Jacob Patrick Dupuis created this Life Tributes page to make it easy to share your memories.