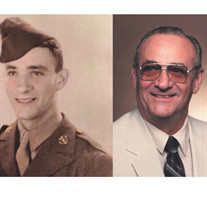 Joseph “Jack” Thibeault, 96, died peacefully with his family at his side on April 26, 2022. He was born in Westbrook on November 6, 1925, the son of Willie and Eva (Gaudreau) Thibeault. Jack grew up in Westbrook and attended local schools. At the age of 16 he went to work at the New England Ship Yard as a welder during the war. At 18 he enlisted in the U.S. Army and served with the 276th Armored Field Artillery. After his honorable discharge he went to work at S.D. Warren Paper Mill, where he worked for 40 years before retiring. Jack and Beverly met at the Westbrook Eagles, where he “asked her to dance and haven’t stopped since!”. After getting married in 1960 they blended their families together and had one child together. Jack and Beverly raised all four children together in their home in Westbrook. Jack was a former member of the Maine Mariners Booster Club, a 60-year member of the Westbrook Eagles, and a 62-year member of the American Legion. In addition to his loving wife of 61 years, Beverly (Smith) Thibeault; Jack is survived by his children; Stephen Thibeault, and his wife, Denise, Debra Verrill, and her husband, Phil, Gail Thibeault, and Wayne Smith; grandchildren; Craig Smith, Cory Smith, Kelly Huston, Nicholas Huston, Nate Verrill, Danny Verrill, Stephen Thibeault, Scott Thibeault, Brandon Thibeault, Danielle Williams and several great grandchildren. Jack was predeceased by his parents and his sister, Annette Boucher. Friends and family are welcome to an hour of visitation on Wednesday, May 4, 2022 from 5:00pm to 6:00pm at Dolby, Blais, Segee Funeral Home, 35 Church St., Westbrook. A Memorial Service will start at 6:00pm.

The family of Jack Thibeault created this Life Tributes page to make it easy to share your memories.

Send flowers to the Thibeault family.