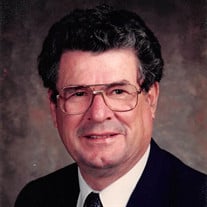 STANDISH – Herbert Hoover Woodbrey, 92, of Standish passed away on November 12, 2020 in Bend, OR. Born November 5, 1928 in Standish ME, son of the late Victor A. Woodbrey and Marjorie (McIntire) Woodbrey. He attended Standish schools and graduated from Standish High School in 1946, receiving the American Legion Award at graduation. He attended Springfield College until his father took sick, then returned home to help with the family business. Herbert became a Chevrolet Dealer in 1950 and is the former owner of Sebago Lake Chevrolet which began in Sebago Lake Village, and is now located on Route 302 in N. Windham, ME, operated by his two sons. Herbert was a member of many civic and business organizations: Standish Kiwanis Club (past president), Standish planning board, Standish budget committee, SAD#6 School Board, St. Joseph College Advisory Council, Sebago Lake Regional Parish (past president), Masonic Lodge of Standish, Maine Auto Dealers (past president), Greater Portland Auto Dealers (past president), Chevrolet Dealer Zone and Regional Council, and New England Chevrolet Advertising Council. He was awarded the 1989 Time Magazine Quality Dealer Award for the State of Maine, and was a corporator of Gorham Savings Bank. Herbert valued education highly, and put five younger siblings and four children through college — most at the University of Maine. An avid sportsman, Herbert wanted to ensure the participation of others. He sponsored the Chevroliers baseball and softball teams, and supported little league and bowling teams as well. He attended Red Sox games with 3 generations of offspring, and was an avid golfer. Herbert fished and hunted, was skilled at bridge, and regarded firewooding as the ultimate sport. Herbert was preceded in death by his beloved wife Audrey (Kimball) Woodbrey. They are survived by two daughters, Carol and her husband John Sargent of Standish, ME, Martha and her husband Bradford Hinman, of Bend OR, and two sons, Bradley and his wife, Guyla (Hodges) Woodbrey and Mitchel and his wife Kathy (Stockmann) Woodbrey of Raymond, ME; ten grandchildren, Joel Sargent (Carissa Zehner) of Redmond, OR, Stephen Sargent (Ceara) of Raymond, ME, Erin Woodbrey (Neal Donovan) of Orleans MA, Timothy Woodbrey of Chicago, IL, Patrick Woodbrey (Annie) of Lebanon, NH, Adam Woodbrey of Raymond, ME, Justin Woodbrey of Raymond, ME, John Hinman (Kristen) of Bend, OR, Hannah Hinman (Eliott Sky) of John Day, OR, and Zachariah Hinman of Warm Springs, OR; eight great-grandchildren, Tessa Nash of Redmond, OR, Edwin, Alita, and Marcus Sargent of Raymond, ME, Hattie, Audrey, and Jackson Hinman of Bend, OR, and Adalyn Sky of John Day, OR; and one great-great-grandchild, Evelyn Farrow of Redmond, OR. Herbert is also survived by two brothers, Dr. Henry Woodbrey and wife Dawn of Orono, ME, and Victor Woodbrey and wife Marie of Gorham, ME, and sister-in-law Connie Woodbrey, widow of brother Dr. James Woodbrey. He was preceded in death by four sisters; Mary Woodbrey, Mabelle Hewes, Elizabeth Stewart, and Eva Lekachman, and four brothers; Leonard, Edward, Cecil and James, as well as many nieces, nephews and extended family. In addition to golf, reading, and watching live or televised sports, Herbert's favorite pastime was following the activities of his offspring, particularly his grandchildren. Indeed, he was known for getting into a few predicaments himself, and then figuring a way out. Every day was an adventure right up to the very end. The family plans to hold a service in the spring or summer of 2021.

STANDISH &#8211; Herbert Hoover Woodbrey, 92, of Standish passed away on November 12, 2020 in Bend, OR. Born November 5, 1928 in Standish ME, son of the late Victor A. Woodbrey and Marjorie (McIntire) Woodbrey. He attended Standish schools... View Obituary & Service Information

The family of Herbert Hoover Woodbrey created this Life Tributes page to make it easy to share your memories.

Send flowers to the Woodbrey family.