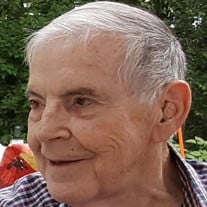 Hiram - Hartson Warren Brown (Brownie) of Hiram Hill Road, Hiram, Maine passed peacefully at his home on the morning of December 18, 2021. He was surrounded by his immediate family; his wife of 67 years Gwendolyn Brown and his three sons, Kenneth and Bruce of Hiram and Timothy of Denmark. His Celebration of Life and military funeral service will be held at the North Windham American Legion Hall, 35 Veterans Memorial Drive on January 8, 2022, between 10 a.m and 12 p.m. His burial will follow directly after, weather permitting, at the North Gorham Cemetery on North Gorham Road, Gorham. Hartson was born with his twin brother Hartley in a blizzard on January 2, 1935, to Clayton and Evelyn (Huey) Brown of Farmington, Maine. The family moved some years later to the farm at the end of Elkins Road in Gorham. He is predeceased by his parents, his twin brother Hartley at birth, his brothers Maynard and Clayton, who both served in the armed forces, and by his sister Marilyn Mains. Hartson served aboard the USS Ticonderoga (aircraft carrier) and the USS McNair (destroyer escort) as a shipfitter during the Korean War. He was awarded The National Defense Service Medal, The Korean Service Medal, The UN Service Medal, The Navy Occupation Service Medal and Good Conduct Medal. He was honorably discharged as an E3 Ship Fitter on October 27, 1955, after serving two years and nine months active duty. He also completed another five years and three months of inactive duty status before completing his service to the Navy. After the Navy, Hartson worked at Southworth Machine in Portland for fourteen years and worked his way up from janitor to Methods Engineer. He went back to Gorham High School to earn his GED and continued his education, earning a Bachelor of Arts Degree. He was a professor for Berlin Technical College (now known as White Mountains Community College) in Berlin, New Hampshire for ten years before retiring. He loved fishing, hunting and camping which he taught to his boys. He was also Scout Master for the North Gorham and Whiterock Troops, participating in Jamborees and outings. He and Gwen also enjoyed woodworking and spent many hours working on different projects. His military years were of the utmost importance to him. He became a lifetime member of the VFW in New Hampshire, DAV and VFW in Maine, serving as Quartermaster at both posts. He was instrumental in the design and oversite of the Veterans Memorial that was erected at the Medway Town Park in Medway, Maine. Hartson is survived by his high school sweetheart, Gwendolyn Ann Labrecque Brown whom he married on October 16, 1954, and his three sons, Timothy W. Brown, Bruce A. Brown and Kenneth O. Brown. He is also survived by Tim and Eleanor’s four children, Heather and Robert Johnston, their children; Elias, Isaias, Micaias and Avigael, Angela and Glenn Seavey, their children; Zoe, Mackenzie, Theodore, Glenn Jr.(CJ), Timothy Jr. and Caitlin Brown, their daughter Riley; Peter and Marissa Brown, their children Donovan and Elise. Bruce’s children, Rebecca, Melissa, Troy, Charlotte and Shannon, Kenneth and Donna, their children; Samantha and Adam Eastman, their children; Mason and Asher, Josh and Abbey Brown and their daughter Hollis. His wife and family ask that in lieu of flowers, that donations be made to Field-Allen Post 148 - Service Program, PO Box 1776 Windham, ME 04062, this is designated for veteran’s needs.

Hiram - Hartson Warren Brown (Brownie) of Hiram Hill Road, Hiram, Maine passed peacefully at his home on the morning of December 18, 2021. He was surrounded by his immediate family; his wife of 67 years Gwendolyn Brown and his three sons,... View Obituary & Service Information

The family of Harston Warren Brown created this Life Tributes page to make it easy to share your memories.

Send flowers to the Brown family.