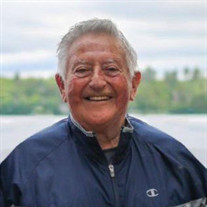 Harry “Bud” LeClair Jr., 86, passed away at his home February 17, 2022. A son of Eugenie Lefebvre and Harry J LeClair Sr., Bud grew up in Westbrook and graduated from Westbrook High School in 1953. He went on to attend the University of Maine at Orono and graduated with an Engineering and Pulp and Paper degree in 1959, and was a long-standing member of the Sigma Nu Fraternity. On August 20, 1960, Bud married Jeanne Louise Lagueux and had two sons Michael and Mark. He started his career at SD Warren Paper company, and later worked for the city of Westbrook as the Code Enforcement Officer for 21 years, retiring in 2001. Bud was a member of St. Anthony’s Parish and served 40+ years in the Knights of Columbus. He also served as a member of the Air National Guard. Bud was a man of faith and it showed by how he lived his live. He loved spending time with his family and had many fond memories of summers at their camp on Sebago Lake Basin. He will be remembered for being the life of the party, having a contagious laugh and for his kindness to all who knew him. He is survived by his sister, Harriet Caron, his children Michael and his wife Angela, Mark and his wife Donna; seven grandchildren, David and his wife Jess, Joseph and his wife Ally, Elizabeth and partner Griffin, Hannah and partner Cole, Heath and his wife Candace, Reece and his wife Cameo, Courtney and her partner Michael. Bud also had five great grandchildren, Tucker, Carter, Jack and Brynn, and Mia. Bud was predeceased by his parents, siblings: Mary, Jeanette, Harry R, Irene, and his beloved wife, Jeanne. A Mass of Christian Burial will be celebrated Wednesday, February 23, at 10:00 am at St. Anthony of Padua Parish 268 Brown Street, Westbrook with an hour of visitation from 9:00 to 10:00am.

Harry &#8220;Bud&#8221; LeClair Jr., 86, passed away at his home February 17, 2022. A son of Eugenie Lefebvre and Harry J LeClair Sr., Bud grew up in Westbrook and graduated from Westbrook High School in 1953. He went on to attend the University... View Obituary & Service Information

The family of Harry "Bud" LeClair Jr created this Life Tributes page to make it easy to share your memories.

Send flowers to the LeClair family.