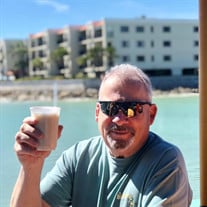 Gregory Holden, 66, passed away March 18, 2021, with his best friend and loving partner by his side at Gosnell Memorial Hospice after a 5 month battle with pancreatic cancer.Gregory was born in Boston, MA on Nov 17, 1954. He was the oldest of four children, born to Dennis Lee Holden and Elizabeth Anne Fox Holden. The family moved to Tewksbury, MA in August of 1955.Greg was raised in Tewksbury where he played hockey and the trumpet with the Orbiters Marching band. He graduated from Tewksbury Memorial High School in 1972. In his youth he attended the South Tewksbury United Methodist Church. He was also a member of the Tewksbury-Wilmington Elks. Greg moved his family to Maine in 1990 where he worked as a general contractor for over 30 years. In his free time, Greg loved to play golf, billiards and darts. He was an all-star baseball player and spent many years coaching youth leagues. He was a sports fanatic who loved the Boston Red Sox and New England Patriots. He enjoyed collecting baseball cards, sports memorabilia and various libations. He loved and laughed and cooked and ate and golfed and built. He was a proud man with a generous spirit. He believed in always telling it “like it is” and in leading by example. He gave all of us his love in the biggest ways possible. He was taken far too early and has left many with a hole in their heart. Gregory is predeceased by his parents and younger brother Geoffrey Holden, who passed away in March of 1988. He leaves behind the love of his life and best friend, Sheryll McCaslin of Westbrook; his three children; Gregory Holden, and his wife Mary Holden, of Gorham, Lindsay Holden of Portland and Edward Holden of Lewiston; his two sisters; Linda McAvoy, and her husband Ed, of Tewksbury and Beth Geoffroy of Haverhill. He was the loving uncle to Lauren and Kelsey McAvoy of Tewksbury and Elizabeth Geoffroy of Idaho, and leaves behind many grandchildren who were near and dear to his heart. Due to covid restrictions, a private memorial service will be held on Friday for the family. To view a livestream of Gregory's service beginning at 4:30 on Friday, March 26th, please visit: https://zoom.us/j/94391934953. Visiting hours for friends and extended family will be held from 5:30 to 7:30pm Friday, March 26th at Dolby, Blais & Segee Funeral Chapel, 35 Church St., Westbrook. A celebration of life will take place during the summer of 2021. The family has requested that remembrances be made in the form of contributions to Gosnell Memorial Hospice.

Gregory Holden, 66, passed away March 18, 2021, with his best friend and loving partner by his side at Gosnell Memorial Hospice after a 5 month battle with pancreatic cancer.Gregory was born in Boston, MA on Nov 17, 1954. He was the oldest of... View Obituary & Service Information

The family of Gregory Holden created this Life Tributes page to make it easy to share your memories.

Send flowers to the Holden family.