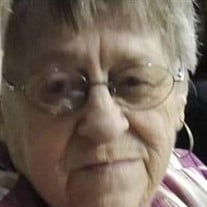 Gorham- Grace Alice (Wight) Sanborn, 82, passed away on August 6, 2021 at her home in Gorham. The daughter of Clarence and Alzina (Green) Wight, she was born in Gorham on May 1, 1939. She attended local schools and was a graduate of Gorham High School, Class of 1957. Grace married her husband, Erwin Sanborn on April 15, 1961 at White Rock Baptist Church, and they were happily married for 56 years. She began her career as a bookkeeper but changed paths and worked hard to receive her nurse’s aide certification, where she worked as a CNA at a local nursing home, and later worked at Spring Harbor Hospital. Grace’s loving nature did not stop at the entrance of the homes and hospitals she worked at but continued at her own front door as she also opened her home to over 59 children throughout the years as a foster parent. Grace enjoyed cooking and canning; her family often complimenting her famous Thanksgiving chicken pie and her homemade relish, which she would give to her family throughout the year. She loved her family and spending time with them. And when she couldn’t be with them in person, she was often talking on the phone for hours on end to her sister or daughter. Grace especially enjoyed spoiling her beloved Shih-Tzu, Willy. The two of them would often be found snuggled up together in her chair and enjoying a nap together. Grace was predeceased by her loving husband, Erwin Sanborn and her sisters, Florence Hersom, Louise Wing, Elinor Parker, Hazel Wight, Joan LaPointe, Janice Hannon, Ann Buzzell, Linda Sullivan, Dianne Wight, and a brother, Norman Wight. She is survived by her loving daughter, Malinda and her husband Ted of Standish, sons James and Christopher Sanborn, both of Gorham, her grandchildren, Courtney Roy and her husband Alex, Joshua Goulet, Cori, Elijah, Emma, and Carley Sanborn; brother, James Wight Sr. of Sebago; sisters, Ginger Carroll, and Kathi Sawyer, of Gorham; Dottie Abbott, of Westbrook; Sharon Abbott of Waterboro; sister, Judy Fistere of Hollis; and sister, Jane Tucci of Standish. Grace also leaves numerous nieces, nephews, great nieces and nephews. A graveside services will be held on Tuesday, August 17, at 11:00AM at Sapling Hill Cemetery, Sebago Lake Road in Gorham. In lieu of flowers, donations may be made in Grace’s memory to the American Heart Association-Scarborough Maine Chapter, 51 US Route 1 Suite M, Scarborough ME, 04074

Gorham- Grace Alice (Wight) Sanborn, 82, passed away on August 6, 2021 at her home in Gorham. The daughter of Clarence and Alzina (Green) Wight, she was born in Gorham on May 1, 1939. She attended local schools and was a graduate of Gorham... View Obituary & Service Information

The family of Grace Alice Sanborn created this Life Tributes page to make it easy to share your memories.

Send flowers to the Sanborn family.