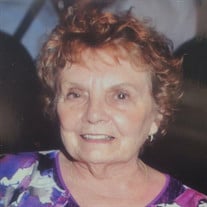 Gloria Nadine (Hale) Eldridge, 91, of Gorham, Maine, passed away on Saturday, May 8, 2021. Gloria was born at home on Peaked Mountain, Sebago in 1929, the last child born at the Douglass Homestead. A daughter of Walter and Edna Hale, she grew up with her parents and grandparents, aunts and uncles. She had cousins, cats, chickens, and goats as playmates. Gloria enjoyed her years as a boarding student at Potter Academy. In 1945, Gloria moved to Gorham with her parents and younger sisters Linda and Laurel. A 1947 graduate of Gorham High School, Gloria married the love of her life, Glenn T. Eldridge in February 1948. Gloria and Glenn had 5 children, Gloria worked in a variety of professions, first at Morse, Peyson & Noyes Ins., later processing blueberries, working at American Can, and Sampson’s Red and White. The family moved to Lebanon, CT in 1965. As a school cafeteria worker at Lebanon Elementary School, Gloria enjoyed working with children. Her years in Connecticut were spent supporting her children, and later, her grandchildren, in their sports and activities. In 1993, Gloria and Glenn left many friends when they retired to Gorham. Since 2020, Gloria has made her home with her daughter Sharon Geer, who provided exceptional care at the end of her life. Gloria enjoyed collecting dolls, assembling a charming collection. She enjoyed doing crafts, loved fairs, she loved music, especially country, and was an enthusiastic concert-goer. A high school basketball player, Gloria followed girls’ and women’s basketball, and was a huge fan of the UCONN women’s basketball and the Maine Black Bears. Gloria and Glenn visited historic sites in the U.S. with Gloria’s sister Linda and brother-in-law George Deering. In 2009, Glenn and Gloria went to Italy, where Glenn served in World War II, accompanied by their granddaughter Alison and daughters Sharon and Sheila. In their later years, Gloria and Glenn enjoyed cruising with Gloria’s sisters, their family and friends. Until recently, Gloria was a full participant in family events and gatherings. She loved summers at the family camp at Hancock Pond in Denmark, Maine. Many have shared memories of days at the lake, beautiful sunsets, and raucous card games, always surrounded by family. For Gloria, family was everything. She was great at staying in touch with everyone over the years, including Glenn’s siblings and extended family. She was proud of her children, Sharon Geer, Sheila Dodds (Peter), Stephen Eldridge (Ellen), Scott Eldridge (Mary Beth), and Jeffrey Eldridge (Lorrie), and delighted in their accomplishments. She cherished a close and life long bond with her sisters, Linda Deering and Laurel Smith. The three sisters shared many adventures over the course of their lives. Gloria was a devoted mother-in-law. She doted on her nieces and nephews, great nieces and nephews and great great nieces and nephews. Gloria was blessed with 16 grandchildren and 11 great grandchildren, who were the focus of her interest, generosity and love. Not a birthday was forgotten, and she always kept up with the family news. Gloria is reunited now with Glenn, together forever. Gloria was predeceased by her husband Glenn T. Eldridge, her grandchildren Donald Eldridge, infant Althea Geer and her infant brother. Visitation will take place on Friday, May 14 from 1:00pm to 2:00pm at Dolby, Blais & Segee Funeral Home, 76 State St., Gorham, Maine. There will be a private service for family at 2:00pm with a public burial at 3:00pm at Eastern Cemetery in Gorham. In lieu of flowers, those that wish to may donate to the American Cancer Society in Gloria’s memory. To attend a live stream of Gloria's service will be available at 2:00pm on Friday, May 14, 2021, please click the link below: https://zoom.us/j/94121892868

Gloria Nadine (Hale) Eldridge, 91, of Gorham, Maine, passed away on Saturday, May 8, 2021. Gloria was born at home on Peaked Mountain, Sebago in 1929, the last child born at the Douglass Homestead. A daughter of Walter and Edna Hale, she grew... View Obituary & Service Information

The family of Gloria Nadine Eldridge created this Life Tributes page to make it easy to share your memories.

Send flowers to the Eldridge family.