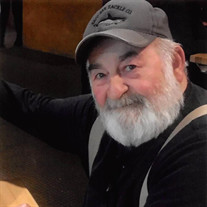 Gerald Strumph Sr.,83, of Standish, passed away on June 11, 2020 peacefully at his home with his family by his side. He was born November 21, 1936 in Portland to parents Samuel and Wynona (Wescott) Strumph. Gerald lived in Gorham for several years with his grandparents, Nellie & Clifford Wescott and then returned to Portland where he graduated from Portland High School. At 17 years old he enlisted in the United States Navy. Much of his Navy career was spent on destroyers away from his family in which he traveled all over the world. He was also on a destroyer off the coast of Cuba during the missile crisis. He retired after 20 years honorably as a Chief Petty Officer. Gerald married Edith Marie Eastwood of Farmville, North Carolina and they had five children. They resided in Norfolk, Virginia and North Carolina for nine years. Gerald, then moved his family to Maine where he and his wife Edith settled in Gorham to raise their 5 children. He was predeceased by his wife, and raised his five children as a single parent. After retiring from the Navy, he went on to learn the trade of welding at Maguire & Jones in South Portland where he excelled and was treated very well. A few years later he was employed by SD Warren Company of Westbrook as a welder in the pipe shop where he retired for a 2nd time. It was at SD Warren in 1986 where he met a wonderful woman named Mary Lou Newcomb whom he later married. Within a short time of his second retirement, he was back at it again working for his eldest son, Gerald Strumph Jr. in the auto repair business where he brought his first black lab, Toby 1 to work with him every day. He built a great rapport with everyone. Gerald was an avid hunter, loved and respected the ocean where he caught many types of fish. He enjoyed brook fishing with his five children tagging along and teaching them to fish. He loved taking his 5 children on Sebago lake to fish, sledding and ice skating. He looked forward to every hunting season with all his boys, 4-wheeling, cooking at the camp and playing cribbage and cards. Gerald is survived by his children; Gerald Jr. and wife Mary Jane Strumph, Samuel Strumph Sr. & future wife Betty Fuessel, Sheila Strumph and her fiancé Brian Elliott, Clifford and his wife Diane Strumph, and Thomas Strumph who all currently reside in Standish, ME; sister, Felicia of Pennsylvania. He is also survived by grandchildren, step grandchildren, great grandchildren, nieces & nephews including, Andrea Connors, Alicia and her husband Tony Chiuchiolo, and their children Caprice Rose, Angelina and Julianna, Sam Jr and his wife Chelsea Strumph and their baby Gwyneth, Joshua & Ashley Strumph, Richard, Kayley, Maria and Wyatt Strumph, Natalie and Misty Hodgdon, Allie Jane Mannette, Angela, Gianna & Anthony Fowler. Gerald had many treasured memories with his beloved nephew Joe Jr, including many trips to North Carolina to visit him. Gerald is also survived by Mary Lou’s four children; Robert & his wife Peggy Newcomb of Oklahoma, Richard Newcomb and wife Janiece of Peaks Island, Terry Newcomb of Gorham, Brian and his wife Darcie Newcomb of Standish, and her grandchildren, Christopher, Nikki, Nissi, Nate, Amber, Missy, Dicky, Alicia, Brian, Terra, Heidi and many great grandchildren. Gerald also treasured his beloved dogs Toby 1 and Toby 2. He is predeceased by his parents, Samuel and Wynona; his first wife, Edith; granddaughter, Amanda Rose Connors; sisters Francine Hyun and Ninnette Scott; brother, Eddie Jordan. Gerald was a dedicated and devout man who believed strongly in God, Country and Family. Romans 5:1 “Therefore, having been justified by faith, we have peace with God through our Lord Jesus Christ”. You will be dearly missed & in our hearts forever loved. A graveside service will be held at North Street Cemetery on Fort Hill Rd in Gorham at 10:30 am on Wednesday, June 17th, 2020. In lieu of flowers, please consider donating in Gerald’s memory to St. Jude’s Children’s Hospital.

Gerald Strumph Sr.,83, of Standish, passed away on June 11, 2020 peacefully at his home with his family by his side. He was born November 21, 1936 in Portland to parents Samuel and Wynona (Wescott) Strumph. Gerald lived in Gorham for several... View Obituary & Service Information

The family of Gerald Strumph Sr. created this Life Tributes page to make it easy to share your memories.

Send flowers to the Strumph family.